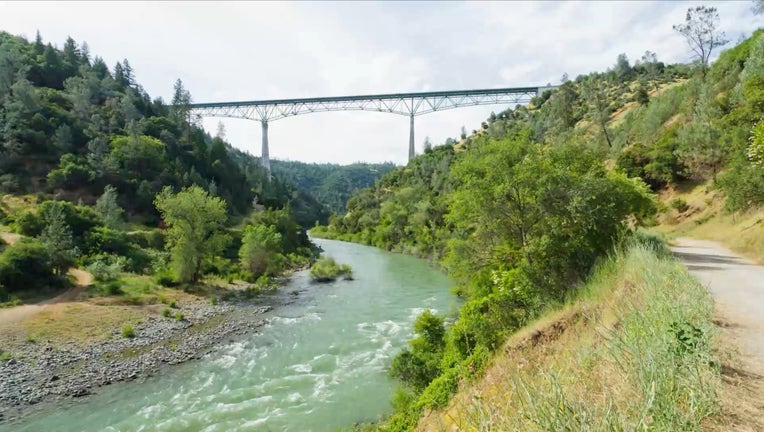 Foresthill Bridge, the highest bridge in California, with the North Fork of the American River flowing 730 feet below it.

FORESTHILL, Calif. - California park officials have shut vehicle access to a pristine swimming hole in Northern California due to an influx of visitors to the “hidden gem” that has become a popular photo backdrop on social media.

There are just 12 parking spots near Yankee Jim's, a sliver of crystal clear water on the North Fork American River, about 35 miles west of Lake Tahoe, but last weekend California State Parks and Placer County authorities counted more than 300 vehicles parked near the rugged roads surrounding a one-way bridge overhead.

Some vehicles blocked entry and exit points to the area, causing an hours-long traffic jam as drivers tried to turn around, the sheriff's office said in a Facebook posting on Friday. Authorities said the scenic area has exploded in popularity thanks to social media postings.

“This presents a huge public safety danger, and cannot allow any first responder to access Yankee Jim’s in the event of any emergency or fire," the statement said.

The move intended to discourage visitors to Yankee Jim’s comes as authorities struggle to control overcrowding at recreational sites as coronavirus cases continue to rise in many parts of the state. California this week surpassed New York as the state with the most confirmed cases. Some 10,000 cases were added Saturday, bringing the state total to more than 445,000. The state has now recorded nearly 8,340 deaths.

Authorities in Shasta County announced Saturday they revoked the public pool permit for a water park after it ignored public health orders not to reopen the pandemic. The county called WaterWorks Park an “immediate threat to public health and safety” for allowing large groups of people to gather in the park without social distancing or face coverings.

With almost all but essential businesses closed to slow the spread of the coronavirus, cooped-up Californians have been flocking on weekends to recreational sites in even greater numbers than usual.

Early in the stay-at-home order from Gov. Gavin Newsom, California State Parks put restrictions on parking at many parks and beaches to deter visitors, in response to crowds that hadn’t been adequately socially distancing. Many of those restrictions were loosened before the end of May.

Placer County’s neighbor, El Dorado County, earlier in the pandemic imposed a travel ban to keep non-residents away from the Lake Tahoe area. That ban has also since been lifted, and the Lake Tahoe region has a disproportionately high number of the sprawling county's cases.

As hospitalizations and positive tests for the coronavirus continue to rise in many parts of the state, more California counties are imposing fines for individuals violating public health orders, including failing to wear masks. Meanwhile, hundreds of state strike teams have been checking businesses for violations of health mandates.