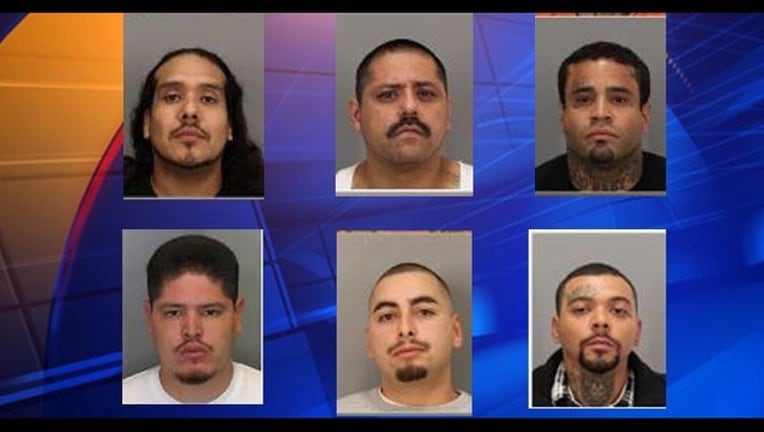 SAN JOSE, Calif. (KTVU and wires) – Seventeen alleged Nuestra Familia gang members were in custody and six others were being sought Friday on charges ranging from attempted murder to conspiring to smuggle drugs, weapons and cell phones to colleagues in jail, authorities said.

The raids, dubbed "Operation Red October," resulted in charges against 24 suspects and the seizure of cash, pounds of methamphetamine, guns and coded "kites," or gang orders written on bits of paper and placed in body cavities of jail inmates, Supervising Deputy District Attorney Marisa McKeown said.

"They were shocked," McKeown said of the gangsters when the raids went down, mostly in San Jose and in north Santa Clara County and Modesto and conducted by SWAT officers. "It was a successful day out."

The FBI's Santa Clara County Violent Gang Task Force ran the Oct. 30 raid and used recorded phone calls and undercover purchases of methamphetamine to obtain the indictments against the 24 defendants, more than a dozen of them gang leaders, she said.

The "kite" messages also seized in the raids are documents that law enforcement had not encountered, she said.

"The people in this indictment are on a level of sophistication and leadership, and with corroborating evidence, that we have never seen before," she said.

Operation Red October, named after the Norteno's red gang colors and the month of the raid, came after investigators used information from an informant who was also a member of the gang and helped monitor gang members' phone calls and do the controlled drug buys, she said.

The informant, who agreed to turn state's evidence, is a convict currently in protective custody in the Santa Clara County jail, where his name has appeared on a "hit list" due his assisting law enforcement, she said.

"It's incredibly dangerous what he did and he is in great danger," McKeown said.

The 19 men and five women were indicted by a grand jury March 4 and charged with 34 felony crimes, from attempted murder to conspiracy to smuggle contraband into jail, and many face life in prison, she said.

Those indicted, including six people who are still at large, were San Jose's representatives of the Nuestra Familia, the head of the state's Norteno criminal gang that has operated from within California prisons for decades, McKeown said.

"What this represents is a very sophisticated network of the highest-ranking gang leadership out on the streets of our county," she said. "This is a very organized group. They've done it since the 60s."

Among those arrested and incarcerated in the county jail is 28-year-old Steve "Pnut" Barba, who was convicted last year of stabbing San Francisco 49ers player Aldon Smith in the chest at a party outside Smith's home near San Jose in 2012.

The gang's incarcerated leaders order the state's Norteno members to commit violent street crimes, from murders to assaults, robberies, burglaries, illegal drug sales and witness intimidation using kites at times smuggled in the rectums of gangsters who violate their parole in order to gain temporary entry to county jail, she said.

"They are literally using the bodies of their members as mules to run their gang," she said.

The messages, written in English with in micro-lettering on tiny pieces of paper, sometimes use codes, such as female names in place of specific men and even the titles of popular films, according to prosecutors.

One note stated, "Cynthia tells Shirley to see 'Titanic,'" which meant to say that two gang members took part in a shooting together, McKeown said.

Another kite threatened someone to do a "removal," a term for murder, saying, "You are to conduct a removal within two or three weeks and if you don't, you will face violence," she said.

Some kites allude to orders from the alleged top crime boss of the gang, Antonio "Chuco" Guillen, who commands the criminal enterprise from within a secure facility at the Pelican Bay State Prison up north in Crescent City, where he is serving a life sentence for murder, she said.

Guillen is highest ranking among three gang generals, all housed at Pelican Bay, she said.

"He is the granddaddy of the Nortenos in California," McKeown said.

The Nuestra Familia gang, based on evidence from captured kites, even has an internal code of conduct. In one case, a gang member who threatened a man in front of the man's wife and children was ordered by gang leaders to pay a $500 fine, she said.

Their trial is set to start on April 13 in Superior Court in San Jose.

Last July 14, months prior to the raid, Barba was sentenced for stabbing Smith to three years in prison and three years of parole, but avoided prison time due to credits he received for serving 560 days in the county jail.

He is now a "three striker," a person who can face a harsher sentence such as life in prison for committing a felony for the third time, McKeown said.