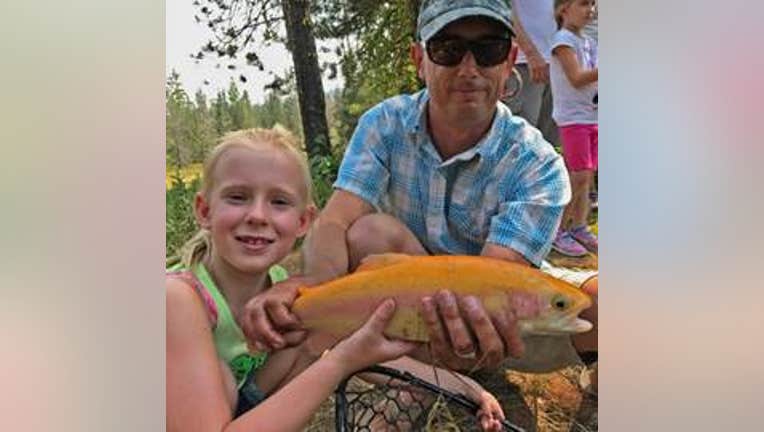 A girl and a man hold up a lightning trout.

OAKLAND, Calif. - If you’re already sick of turkey, the East Bay Regional Park District has stocked four of its lakes with 2,000 pounds of a special “lightning trout” that tastes pretty much like salmon.

“They are truly a beautiful, great fighting, and great eating trout!,” the district said on its website.

Anglers can catch up to six pound of fish each and they should hurry up to catch them; park officials don't think they'll last long. Either they will be snapped up pretty quickly by fishing poles, or predators might eat them.

Stocking fish in the district’s lakes is common, and usually occurs weekly, the Bay Area News Group reported. The lightning trout will join rainbow trout, all sorts of bass, bluegill, sunfish, black crappie and catfish already swimming in the lakes.

In the cooler months, trout is stocked, while in the summer months, the lakes are stocked with catfish, which can withstand warmer water temperatures, BANG reported.

Anyone 16 years and older must buy a district fishing access permit at East Bay regional parks in addition to having a valid state fishing license.

However, on Friday the parks district will hold a “Green Friday” where all park entrance fees are waived, including the daily fishing permit, said Dave Mason, the district’s public information supervisor. However, state licenses for fishing are still required. For more information, click here.