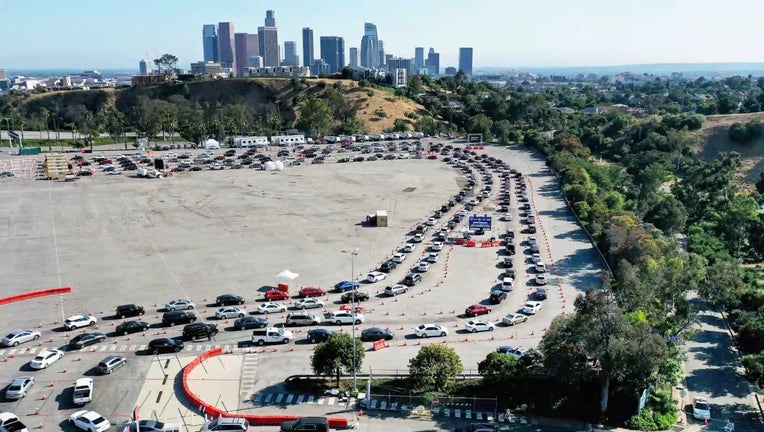 LOS ANGELES, CALIFORNIA - JUNE 26: An aerial view of people in cars lined up to be tested for COVID-19 in a parking lot at Dodger Stadium amid the coronavirus pandemic on June 26, 2020 in Los Angeles, California. The United States set another single-

After months of proffering an often piecemeal and chaotic response to the novel coronavirus pandemic, the federal government is still failing to extend protections to the nation's vulnerable immigrant communities.

With the impacts of COVID-19 falling disproportionately on people of color, the Trump administration's anti-immigrant policies and Congressional inaction are compounding the damage by discouraging newcomers from seeking vital health care services, financial assistance and food programs, according to a panel of experts convened by Ethnic Media Services Friday.

"It's been clear that the pandemic's health and economic impacts have fallen hardest on communities of color, including immigrant families," said Madison Allen, a senior policy lawyer at Center for Law and Social Policy in Washington, D.C.

And even if the second relief bill, dubbed the "Heroes Act," wasn't currently stalled in the U.S. Senate, its provisions similarly fail immigrant communities.

For example, while millions of American households received a $1,200 stimulus check after the Cares Act passed, only people with social security numbers were eligible, leaving both documented and undocumented immigrants left to fend for themselves.

The law also withholds payments to immigrant parents and their children even in cases where those children are American citizens.

Likewise, millions of undocumented immigrants are unable to take advantage of the extension of federal unemployment benefits under the Cares Act since they are ineligible for such payments even under normal conditions.

Undocumented immigrants who have lost their jobs due to the pandemic are also not eligible for the federal Supplemental Food and Nutrition Program, or SNAP, but can access the newly created Pandemic EBT program, which provides food assistance to families that qualify for free lunch programs, Allen said.

And while federal assistance programs systemically leave them out, immigrant communities are being helped by some state and local programs.

"Several states and localities have really stepped up to provide resources to immigrant families," she said.

One such state is California, which created the Disaster Relief Assistance for Immigrants program to provide $500 to undocumented adults who are ineligible for other help.

Even in places where such programs exist, however, immigrant communities are still struggling with a lack of access to health care and public health information, which is particularly troubling during a deadly global pandemic.

In addition to the pre-existing barriers to care, including the lack of access to affordable health insurance and the lack of employer-provided insurance plans, many immigrants fear availing themselves of health programs for which they are eligible over fears that it will negatively affect their immigration status.

Much of this fear has blossomed due to the Trump administration's so-called "public charge rule," which allows immigration officials to deny visas and green cards to people based on the suspicion that they might seek social safety net benefits in the future.

"The public charge rule has further exposed the discrimination and racism in our public health system," said Luvia Quiñones, health policy director at the Illinois Coalition for Immigrant and Refugee Rights.

Many immigrants avoid seeking health care, including COVID-19 testing and treatment, over concerns that any assistance they might receive could permanently damage their immigration status.

And even though federal guidelines explicitly state that testing and treatment related to COVID-19 don't fall under the public charge rule, the U.S. Citizenship and Immigration Services agency has failed to conduct any meaningful outreach in order to encourage immigrant communities to seek care, said Connie Choi, field manager and strategist at the National Immigration Law Center.

Additionally, fear of immigration raids at hospitals and health centers prevents many undocumented residents from being tested and treated for COVID-19, Choi said.

To protect the health of all communities during the pandemic, everyone, regardless of immigration status, should have access to publicly funded health insurance, said Dr. Daniel Turner-Lloveras, assistant professor of medicine at Harbor-UCLA/David Geffen School of Medicine at the University of California, Los Angeles.

"The chain is only as strong as its weakest link, so if we decide not to provide health insurance to a certain population, it's only natural that that will allow the virus to spread," Turner-Lloveras said.

He also said the federal government should stop detaining immigrants who are seeking health care, even if it's for medical conditions unrelated to COVID-19.

Another way to fight the pandemic is to eliminate overcrowding at immigrant detention centers and to stop forcing immigrants to remain in Mexico while waiting for their cases to be resolved, Turner-Lloveras said.

It's also important that federal funding is provided to keep neighborhood medical clinics afloat, since that's where many immigrant families receive much of their care.

"If they have to close their doors there aren't many options where undocumented immigrants can turn to without having the fear of ICE knocking on the door," said.