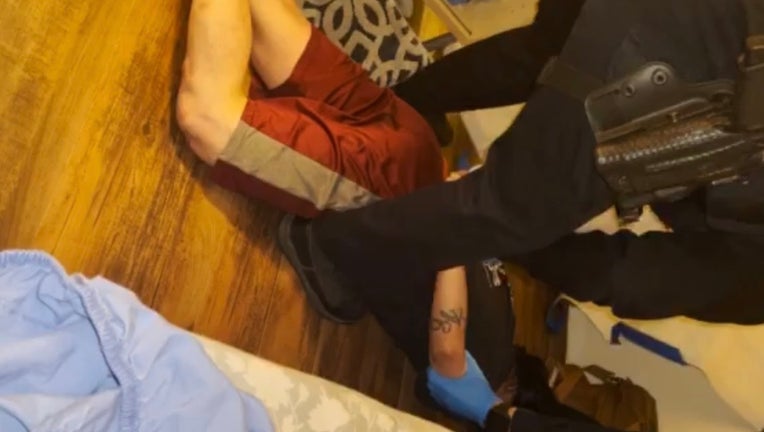 Angelo Quinto lays unconscious on his family's floor on Dec. 23 2020. His family said he died after police put a knee on his neck while he was experiencing a mental health crisis.

ANTIOCH - A 30-year-old Antioch man died after an officer pressed his knee on the back of the man’s neck while he was suffering a mental health crisis, family members told KTVU Wednesday.

The family of Angelo Quinto is planning to file a legal claim against the Antioch Police Department on Thursday, following the Dec. 23 episode that left Quinto unconscious and bloody. Quinto was pronounced dead at a hospital three days later.

The family is searching for answers as police are under heightened scrutiny around the nation, following high-profile killings like the death of George Floyd, who died after an officer in Minnesota put his knee on Floyd’s neck.

Antioch police have released almost no information about the case. In a statement Thursday, Lt. John Fortner said the investigation is still open.

He said the department is working with the local district attorney’s office and the coroner’s office.

A 30-year-old Antioch man died after an officer pressed his knee on the back of the man’s neck while he was suffering a mental health crisis, family members told KTVU Wednesday.

"Once some additional portions of the investigation are completed, APD will be getting together with all the involved agencies to provide more information to the public," Fortner said in a statement.

An autopsy is still pending.

But for Quinto’s family who witnessed the incident, things could not be more clear.

It began two days before Christmas when Quinto slipped into an episode of paranoia he’d recently been experiencing since suffering a head injury.

The former Navy sailor was holding onto his mother and sister telling them not to leave him. The mother said he repeatedly said "What is happening?"

Fearing Quinto could become more of a threat, the sister, Isabella, said she called 911, while the mother put Quinto in bear hug on the floor in their bedroom.

When police arrived, the women said Quinto had calmed down, but they said officers restrained him anyway.

"One officer was holding his legs and the other officer had his knee or lower leg here," the mother said, while motioning to the back of her neck.

They said several minutes elapsed before paramedics arrived. By then, Quinto wasn’t moving and blood was coming out of his mouth.

Cassandra took video on her cell phone once she realized something was wrong. It shows Quinto limp and unconscious with a bloody face. Paramedics hoisted him on a gurney and to a waiting ambulance.

Police then brought the mom and daughter to the station to question them.

Quinto’s family recently sought the services of Bay Area Civil Right’s attorney John Burris. They’re planning to hold a press conference on Thursday to coincide with their legal claim – a precursor to a lawsuit.

While they wait for answers, the mother and daughter are overcome with grief. They still have the presents they wrapped for Quinto for Christmas, unopened next to a memorial in their home.

"I’m always going to regret calling the police and hope no one has to regret doing what they think is the right thing," Quinto’s sister, Isabella, said.