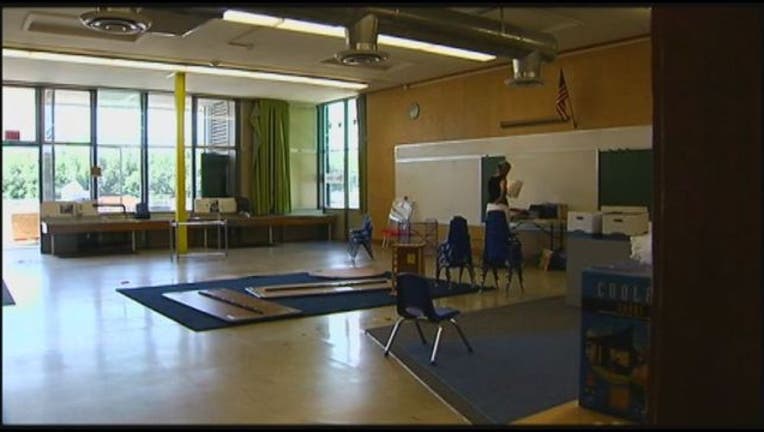 ANTIOCH, Calif. (KTVU) – Dozens of boxes and classroom items were packed up and stored on Wednesday, as Kids’ Club Preschool in Antioch prepared to vacate its rented space.

The preschool had leased space at Bidwell Continuation High School since 2004, but on Wednesday movers had arrived to pack every classroom item into a trailer. The items will sit in storage in Concord, according to Mokski.

A few teachers and teacher’s aides were on hand to help clean out the classrooms.

“It’s sinking in and it’s unbelievable,” Ariadna Santos said. “These classrooms were up and running less than three weeks ago.”

Santos and other staff have been asked to find other employments until the preschool can find another space to operate.

“We had hoped that if we spoke up and fought back that we would find a solution,” she said. “But after this week, I don’t have a job.”

Mokski said the district notified them a year ago that their lease would not be renewed. He said three months ago, another space they were promised was taken off the table.

“I love the kids, I love the teachers and I want them back,” he said. “The community does not have the strength to lose this program.”

KTVU reached out to the Antioch School District for comment, but was told the superintendent was not available. Attorney Addison Covert, based in Sacramento, returned our call and said the space needed to be cleared out to house special education students.

According to the Antioch Unified School District’s website, the district “contacted several community leaders in an attempt to find a suitable alternative space for the Kids' Club program.”

The website said at least one community leader has expressed interest in housing the Kids' Club program at his facility, but no agreement has been made.

Mokski said other options offered up by the district were not viable to house a preschool.

He said the preschool served 300 students last year and there are 250 children on a waiting list to enter the preschool. He is in talks with two potential landlords, but nothing has been finalized. He said those facilities would mean a substantial increase in rent and hundreds of thousands of dollars in renovation costs to make the facility into a preschool.

“A non-profit preschool does not have the pockets to absorb an increase of four times the rent on top of a $10,000 renovation cost,” he said.

If a location is not secured, Mokski said the classroom equipment would be turned over to the California Department of Education or the Contra Costa Community Service Bureau.