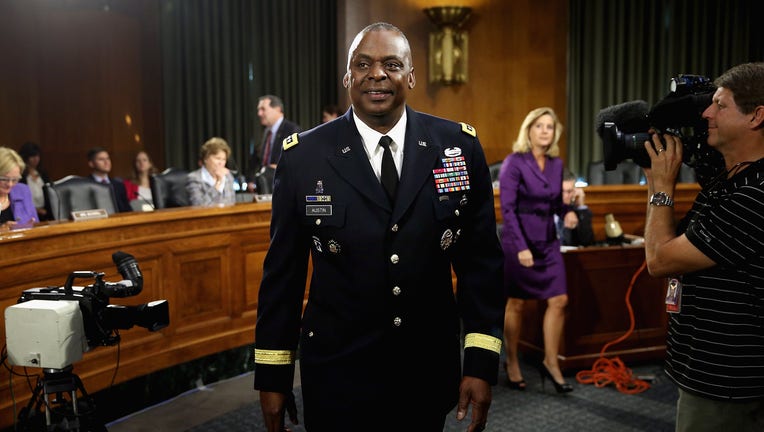 WASHINGTON, DC - SEPTEMBER 16: Gen. Lloyd Austin III, commander of U.S. Central Command, prepares to testify before the Senate Armed Services Committee about the ongoing U.S. military operations to counter the Islamic State in Iraq and the Levant (IS

WASHINGTON - President-elect Joe Biden will nominate retired four-star Army general Lloyd J. Austin to be secretary of defense, according to three people familiar with the decision. If confirmed by the Senate, Austin would be the first Black leader of the Pentagon.

Biden selected Austin over the longtime front-runner candidate, Michele Flournoy, a former senior Pentagon official and Biden supporter who would have been the first woman to serve as defense secretary. Biden also had considered Jeh Johnson, a former Pentagon general counsel and former secretary of homeland defense.

The impending nomination of Austin was confirmed by three people with knowledge of the pick who spoke to The Associated Press on condition of anonymity because the selection hadn't been formally announced.

As a career military officer, the 67-year-old Austin is likely to face opposition from some in Congress and in the defense establishment who believe in drawing a clear line between civilian and military leadership of the Pentagon. Although many previous defense secretaries have served briefly in the military, only two -- George C. Marshall and James Mattis -- have been career officers. Marshall also served as secretary of state.

Like Mattis, Austin would need to obtain a congressional waiver to serve as defense secretary. The laws were meant to preserve the civilian nature of the Department of Defense.

Austin is a 1975 graduate of the U.S. Military Academy at West Point and served 41 years in uniform.

Biden has known Austin at least since the general's years leading U.S. and coalition troops in Iraq while Biden was vice president. Austin was commander in Baghdad of the Multinational Corps-Iraq in 2008 when Barack Obama was elected president, and he returned to lead U.S. troops from 2010 through 2011.

Austin also served in 2012 as the first Black vice chief of staff of the Army, the service's No. 2-ranking position. A year later he assumed command of U.S. Central Command, where he fashioned and began implementing a U.S. military strategy for rolling back the Islamic State militants in Iraq and Syria.

Austin retired from the Army in 2016, and he would need a congressional waiver of the legal requirement that a former member of the military be out of uniform at least seven years before serving as secretary of defense. That waiver has been granted only twice -- most recently in the case of Mattis, the retired Marine general who served as President Donald Trump's first Pentagon chief.

The Mattis period at the Pentagon is now viewed by some as evidence of why a recently retired military officer should serve as defense secretary only in rare exceptions. Although Mattis remains widely respected for his military prowess and intellect, critics say he tended to surround himself with military officers at the expense of a broader civilian perspective. He resigned in December 2018 in protest of Trump's policies.

Austin has a reputation for strong leadership, integrity and a sharp intellect. He would not be a prototypical defense secretary, not just because of his 41-year military career but also because he has shied from the public eye. It would be an understatement to say he was a quiet general; although he testified before Congress, he gave few interviews and preferred not to speak publicly about military operations.

When he did speak, Austin did not mince words. In 2015, in describing how the Islamic State army managed a year earlier to sweep across the Syrian border to grab control of large swaths of northern and western Iraq, Austin said the majority of Iraqi Sunnis simply refused to fight for their government.

"They allowed -- and in some cases facilitated -- ISIS's push through the country," Austin said.

He earned the admiration of the Obama administration for his work in Iraq and at Central Command, although he disagreed with Obama's decision to pull out of Iraq entirely in December 2011.

Austin was involved in the Iraq War from start to finish. He served as an assistant commander of the 3rd Infantry Division during the invasion of Iraq in March 2003 and oversaw the withdrawal in 2011. When Austin retired in 2016, Obama praised his "character and competence," as well as his judgment and leadership.

Like many retired generals, Austin has served on corporate boards. He is a member of the board of directors of Raytheon Technologies.