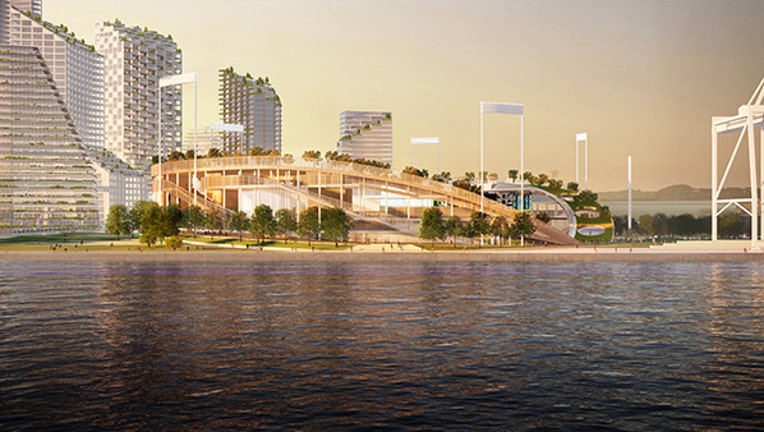 OAKLAND, Calif. - A spokesperson for Mayor Libby Schaaf’s office responded to the Oakland A’s Howard Terminal proposal on Friday. The price tag of the $12 billion development was released, including a $1 billion 35,000-seat stadium.

Mayor Schaaf’s spokesperson, Justin Berton said they are evaluating the proposal and are committed to keeping the A’s in Oakland, but seek an equitable deal for not only the team, but one that also benefits the city’s residents.

In A’s President Dave Kaval’s letter to the city, he said the Coliseum holds fond memories for fans, but that the 55-year-old stadium is at the "end of its useful life."

Kaval said there have been numerous community meetings on the waterfront ballpark proposal. The A’s have been in pursuit of this goal over the last three years.

The stadium would provide, "more than just a ballpark for us and for Oakland: public access to the waterfront, greenspace and parks, housing for Oaklanders, union jobs, and countless community benefits," Kaval said.

The A’s are now asking Oakland City Council to vote on their project before summer recess. It includes a $1 billion price tag for the stadium’s buildout. Kaval said that would be privately financed.

However, the mayor’s office said they don’t want to leave Oakland’s taxpayers on the hook.

"The City is willing to bring to bear its resources to help make this vision a reality; however, today’s proposal from the A’s appears to request public investment at the high end for projects of this type nationwide," Berton wrote.

"How many units of truly affordable housing will be included in this project? Are the A’s and all the businesses on site committed to local and fair chance hiring? Will they adequately clean up existing toxic areas on site?" EBASE’s senior Campaign Director Liana Molina said.

EBASE seeks a concrete community benefits agreement from the developer that specifically includes the percentage of affordable housing units, specifics on job policies and programs and mitigations for environmental impacts.

Kaval said the A’s would fully-fund protection against sea level rise and environmental remediation, use unionized labor in the ballpark’s construction and operation, and that $450 million of project generated revenue would be earmarked for community benefits such as affordable housing.

The ballpark project would generate approximately $955 million for the City of Oakland's general fund, Kaval said.