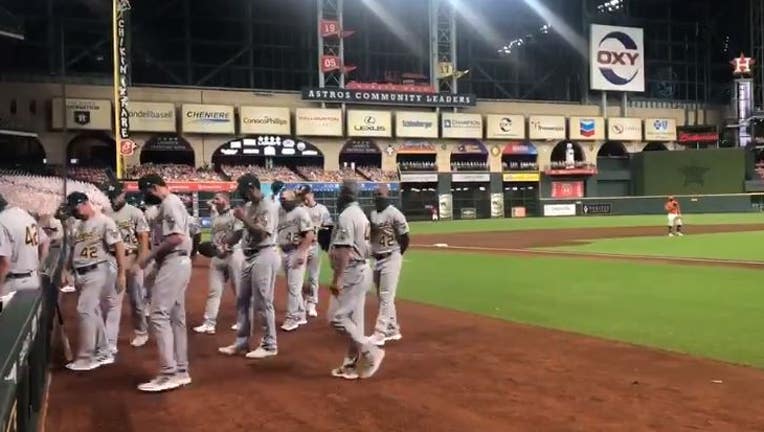 A's walk off field in Houston to protest police shootings of Black men.

HOUSTON - The Houston Astros and Oakland Athletics jointly walked off the field following a moment of silence, draping a Black Lives Matter T-shirt across home plate as they chose not to play on Friday night.

The postponement came on Jackie Robinson Day across the majors, and in the wake of 29-year-old Jacob Blake, a Black man, being shot by police in Wisconsin over the weekend.

All players, managers and coaches at Minute Maid Park were wearing No. 42, the jersey number Robinson wore when he broke the major league color barrier in 1947.

The Athletics and Astros placed a No. 42 jersey in each batter’s box. Houston starters took their positions, with other players on both sides lining up in front of their dugouts.

After a moment of silence, the teams walked back to their clubhouses.

There have been 11 big league games postponed this week as clubs joined teams in the NBA, WNBA and MLS in calling off games while protesting social injustice.

Major League Baseball let teams decide whether to play or not.

No makeup date immediately was announced for the A’s-Astros game.

Oakland starter Chris Bassitt appeared to be going through his pregame routine, ramping up to pitching in the visitor’s bullpen but abruptly stopped warming up about 15 minutes before the scheduled first pitch.

Houston starter Lance McCullers Jr. walked to the right field bullpen with an orange glove and ball, but only sat on a bench and never warmed up before heading back to the dugout shortly after the national anthem.

On Thursday, the New York Mets and Miami Marlins took a similar action before their game at Citi Field.