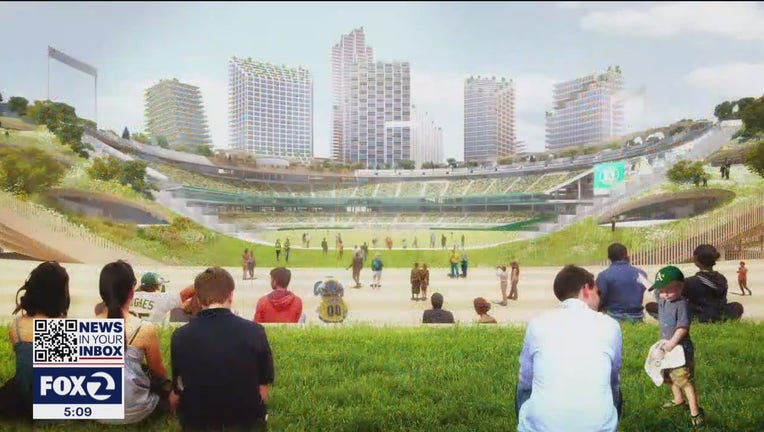 A committee to protect San Francisco Bay recommended Wednesday that the Port of Oakland keep Charles P. Howard Terminal for maritime use rather than allowing the Oakland A's to build a new ballpark there.

The Seaport Planning Advisory Committee voted 5-4-1 to recommend to the San Francisco Bay Conservation and Development Commission that Howard Terminal be maintained for Port use.

The commission is expected to vote June 2 on the same question, a vote that is necessary by law and could derail the plan to keep the A's in Oakland.

Wednesday's vote by the Seaport Planning Advisory Committee, whose main aim is to prevent San Francisco Bay fill, is not binding. It's merely a recommendation.

Jim McGrath, who chaired the meeting and worked for 16 years at the Port of Oakland, said the possibility of saving 40 acres of San Francisco Bay from being filled in was important to his vote to keep Howard Terminal for maritime use.

Bryan Brandes, maritime director of the Port of Oakland and a member of the advisory committee, was in support of allowing the A's to build a ballpark at Howard Terminal. Brandes said the Port will have enough land to help handle regional cargo needs if it grows moderately.

In addition to McGrath, those in favor of keeping Howard Terminal for maritime use included Christine Zortman, executive director of the Port of Redwood City, Jimmy Triplett, senior vice president for West Coast operations at the Benicia Port Terminal Company, David Lewis, executive director for Save the Bay, and Capt. Lynn Korwatch, executive director for the Marine Exchange of the San Francisco Bay Region, a nonprofit that collects and disseminates shipping information, among other work.

Those besides Brandes in favor of allowing the A's to use Howard Terminal were Alan Wolken, director of the Port of Richmond, Kara Vuicich with the Metropolitan Transportation Commission/Association for Bay Area Governments, and Diane Oshima with the Port of San Francisco, who felt the committee needed more information to make a recommendation.

Abstaining was Jean Finney with Caltrans.

"That was a very disappointing setback today," Oakland A's President Dave Kaval said in an interview.

Reports completed over two years show that Howard Terminal is not needed for maritime use, Kaval said.

"It's a serious setback," he said, noting that the A's still have an at bat before the San Francisco Bay Conservation and Development Commission.

But often the commission will simply take the committee's recommendation, Kaval said.

But the A's have not given up on Oakland, he said.

Berton added, "We believe the Port of Oakland and its leadership knows its capacity best, and we agree with their detailed analysis that shows they can continue to thrive and grow port activities well into the future, as well as support a transformational, world-class development that will open 18 acres of public parks along the waterfront and create more affordable housing and thousands of great union jobs for the region."