OAKLAND, Calif. - The Oakland A’s on Wednesday filed a lawsuit against the California Department of Toxic Substances Control, alleging that the state agency has failed to enforce environmental law against a large metal shredding facility at the Port of Oakland.

In a stream of 16 tweets, A’s President Dave Kaval outlined the team’s motivation behind the suit against Schnitzer Steel, the largest metal shredding facility in California. Kaval said the conversation began when the team first started exploring Howard Terminal as a potential location for their new stadium--Schnitzer Steel and Howard Terminal are neighbors.

The lawsuit filed at the Alameda County Superior Court is calling for the 26.5-acre complex to comply with the Hazardous Waste Control Law. It says some 23,000 residents in close proximity deserve cleaner air and Schnitzer Steel consistently generates hazardous waste that exceeds toxicity thresholds. Which, if toxic materials are left outside, can leach into groundwater or catch fire, Kaval said.

“Hazardous materials are supposed to be tightly regulated. Long ago, CA passed tough rules on the handling of hazardous waste to protect communities,” the A's president wrote in a tweet. “[DTSC] has exempted Schnitzer from having to comply fully with the law for 30 years. This is regulatory failure.” 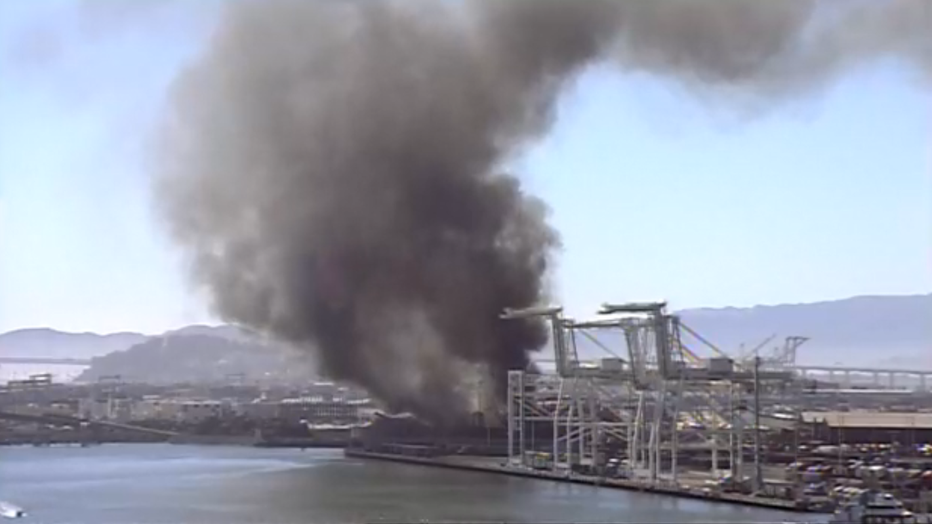 The A's said there have been at least five fires at Schnitzer Steel since 2018, with the most recent one in June.

But, according to Colin Kelly, director of public affairs at Schnitzer Steel, the effort by Kaval and the A’s to bring environmental justice to West Oakland is a ploy to make room for a new stadium.

“The Oakland A’s’ attack on the Department of Toxic Substances Control and Schnitzer Steel is nothing more than an acceleration of the A’s efforts to dismantle the Port of Oakland to make room for their waterfront stadium and luxury housing development,” Kelly said in a statement.

Community members and workers at the port have also voiced concerns about the A’s planned Howard Terminal location disrupting operations at the port and negatively impacting jobs. Last month, demonstrators protesting the waterfront stadium held a rally and car caravan at the Oakland Coliseum.

The East Oakland Stadium Alliance opposes Oakland’s anticipated sale of its half of the Coliseum site to the A’s without a provision requiring the team to build a new stadium on the Coliseum grounds. Mike Jacob, vice president of the Pacific Merchants Shipping Association and member of the stadium alliance, weighed in on the A’s legal action.

“We have seen this play out countless times up and down the coast – developers trying to push out industrial jobs in exchange for housing and tourist and entertainment venues – and we’ve already let it happen in San Francisco,” Jacob said. “We have to fight to make sure that this doesn’t happen again in Oakland.”

Additionally, the legal action poses risks to blue-collar jobs held by local Black residents, according to Kelly. But Kaval said the A’s can help create environmental and economic benefits that simultaneously cleans the air and water, employs community members, modernizes the port, and preserves thousands of union jobs.

While discussing the lawsuit on The Four, Kaval said that Schnitzer Steel being an opponent of the ballpark site has nothing to do with the legal action.&nbsp;

According to the A's, DTSC has allowed Schnitzer Steel to operate without complying with Hazardous Waste Control Law for decades and they've allowed operations at the port to continue despite finding that facilities like Schnitzer pose serious health risks to the community.

“The A’s are serious about being #RootedInOakland,” Kaval wrote. “We can’t ignore these concerns.”

KTVU reached out to DTSC and was told the state agency cannot comment on pending litigation, but that it is "deeply committed to protecting Californians and the environment from toxic harm--particularly those who suffer from a disparate level of pollution." They added that updates will be provided to the community and stakeholders when it becomes available.

A “Schnitzer Watch” petition has been created that includes a copy of the legal filing. As of 1:30 p.m. Wednesday, the petition was nearing their goal of 1,000 signatures with 825 people pledging support.