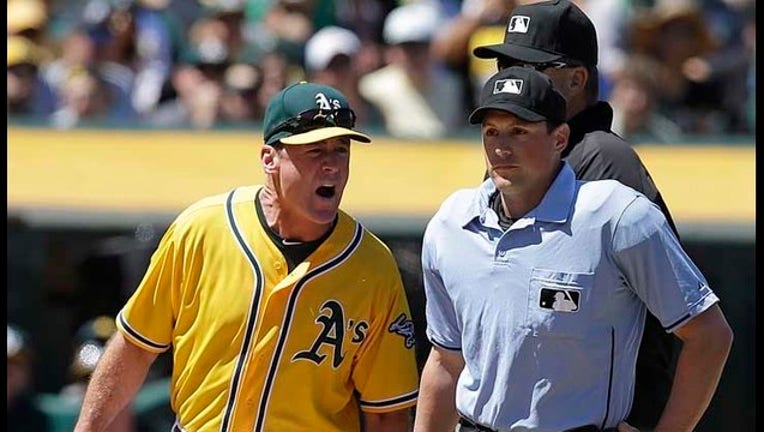 OAKLAND, Calif. (AP) — The Athletics will finally get a day off — their first in more than a week and just the second of the season. With a tired bullpen and a four-game losing streak, Oakland welcomes the break.

Evan Gattis hit a two-run double in the ninth inning and the AL West-leading Astros completed their first sweep of the A's with a 7-6 win Sunday.

"With the state of our bullpen right now, we need a day off," manager Bob Melvin said. "We're one of the few teams that's only had one, if not the only one. We did a lot of good things right today, but we're doing just enough to lose games right now."

Oakland has dropped five of six to fall four games under .500 for the first time since July 1, 2012. The problems have come from everywhere, too.

The A's have committed 10 errors in their last seven games and continue struggle at the plate in key situations.

Melvin — perhaps feeling the heat — was ejected in the top of the fourth by plate umpire Quinn Wolcott, who also ejected Melvin from a game last June. Melvin was in the dugout when he was tossed after a pitch thrown by starter Drew Pomeranz to Jason Castro was called a ball.

"I think both teams had some issues with it in that game," Melvin said. "Maybe he thought I was a little more demonstrative than anybody else. He's thrown me out before for that."

Castro eventually walked and scored on Marisnick's second home run of the season, putting the Astros up 5-2.

The A's, who scored only seven runs in their previous three games, seemed to get a spark from their manager's ejection.

Oakland tied it with four hits off Houston starter Asher Wojciechowski in the bottom of the frame. Brett Lawrie had a two-run single and Craig Gentry — who went into the game batting .040 — also drove in a run.

"The last couple of times for us we've been able to fight back a little bit, but we just haven't been able to come away with a W," Lawrie said. "But I like the way that we're competing and the way we're going out there."

Gattis matched a career high with four RBIs. His go-ahead double with one out came after the A's intentionally walked Jed Lowrie to load the bases.

Gattis lined a 1-2 pitch from Tyler Clippard (0-2) to the deepest part of the field at O.co Coliseum, and center fielder Sam Fuld stumbled while chasing the ball in the air.

Jose Altuve extended his hitting streak against the A's to 29 games. Altuve and Marisnick scored on Gattis' deciding hit.

Lawrie drove in three runs for Oakland, which dropped three to Houston and has lost a season-high four straight overall.

Tony Sipp (2-0) retired four batters for the win. Former A's reliever Luke Gregerson pitched the ninth for his fourth save.

Oakland had taken a 6-5 lead on Marcus Semien's single in the seventh.