Astronomers have discovered four mysterious objects that appear to be circular and brighter along the edges, according to a recent study.

LOS ANGELES - A team of Russian astrophysicists have speculated that supermassive black holes that are known to rip through the fabric of space-time may actually be the entrances of wormholes “traversable” by spacecraft.

According to a study published in Monthly Notices of the Royal Astronomical Society, a team of researchers seeking to prove the existence of wormholes say they may have found evidence that some known black holes in the universe are entrances to portals that could allow travelers to venture through space-time.

“The wormholes we are considering are traversable wormholes, so theoretically spacecraft can travel through them,” lead researcher Mikhail Piotrovich told Vice’s Motherboard. “But of course, it should be understood that we know very little about the internal structure of wormholes and moreover, we do not even know for sure whether they exist at all.”

Wormholes were first theorized in the early 1900s when Albert Einstein proposed through his theory of general relativity the possibility of cosmic bridges that could connect two different points in space, theoretically reducing the distance and time one would travel in the vast scale of space. 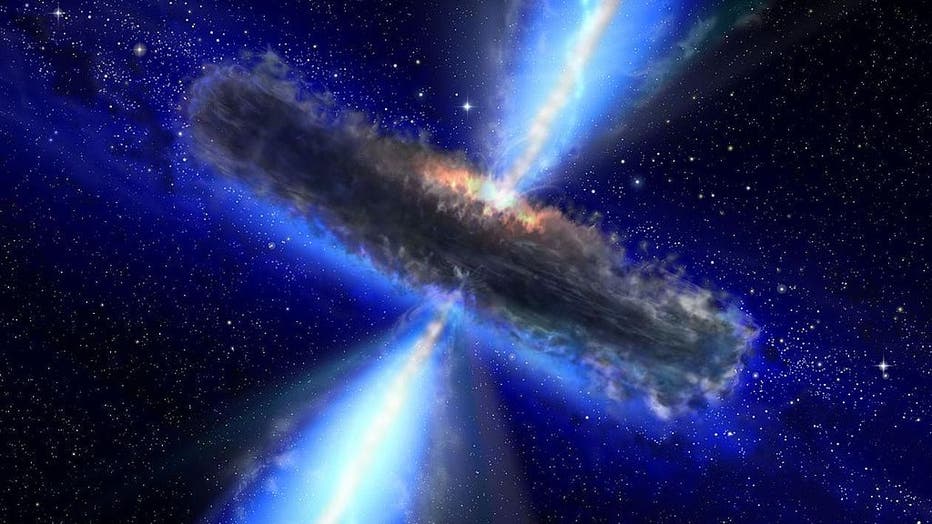 FILE - In this handout from NASA/ESA, an artist's concept illustrates a quasar, or feeding black hole. NASA's Wide-field Infrared Survey Explorer (WISE) revealed millions of potential black holes in its survey of the sky in 2011.

While the existence of these celestial gateways has never been proven, Piotrovich’s study theorizes that energy emitted from some observed supermassive black holes may actually be the entrances to wormholes connecting galaxies across space and time.

According to his team’s study, wormholes detected in parts of our galaxy or others would “radiate with a distinctive spectrum.”

His team explained that within most galaxies, there are cores that radiate incomprehensible amounts of energy called active galactic nuclei (AGN).  These cores eject energized matter that nearly match the speed of light and are fueled by collisions between supermassive black holes and “accretion disks” which make up space dust and other stars consumed by the black holes.

“Under some – quite general – assumptions such wormholes may emit gamma radiation as a result of a collision of accreting flows inside the wormholes,” the study authors wrote. “This radiation has a distinctive spectrum much different from those of jets or accretion discs of AGNs. An observation of such radiation would serve as evidence of the existence of wormholes.”