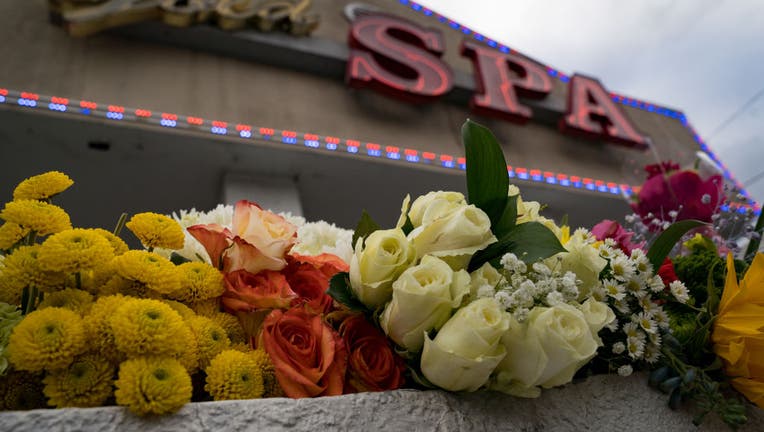 ATLANTA, GA - MARCH 18: Flowers adorn Gold Spa during a demonstration against violence towards women and Asians following Tuesday night's shooting in which three women were gunned down on March 18, 2021 in Atlanta, Georgia. Suspect Robert Aaron Long,

ATLANTA - Hyun Jung Grant loved disco and club music, often strutting or moonwalking while doing household chores and jamming with her sons to tunes blasting over the car stereo.

"I learned how to moonwalk because, like, I saw her moonwalking while vacuuming when I was a kid," Park said.

On Tuesday night, Park was at home playing video games when he heard a gunman had opened fire at the Atlanta massage business where his mother worked. He rushed to the scene and then to a police station to find out more information. But it was through word of mouth that he learned his mother was dead.

Grant, 51, was among eight people killed by gunfire at three Atlanta-area massage businesses. The Fulton County medical examiner released her identity Friday along with those of three other victims: Soon C. Park 74; Suncha Kim, 69; and Yong A. Yue, 63.

Authorities in nearby Cherokee County had previously identified the others as Delaina Ashley Yaun, 33; Paul Andre Michels, 54; Daoyou Feng, 44; and Xiaojie Tan, 49, who owned one of the massage businesses.

Seven of the slain were women, and six of them were of Asian descent. Police charged a 21-year-old white man with the killings, saying he was solely responsible for the deadliest U.S. mass shooting since 2019.

The situation has been harrowing for Park, who said he has not been able to claim his mother’s body from the medical examiner’s office because of a complication with her last name, which is legally Grant. Park said that name is from a marriage he does not recall, and he can’t find papers showing a separation to prove that he is the next of kin.

Questions over motive in Atlanta spa attacks have prompted a nationwide outcry over the portrayal of Asian American women. Some say the suspect's comments point to sexist and racist stereotypes in this country.

Authorities have said Robert Aaron Long, who is charged with eight counts of murder, told them he wasn’t motivated by race. Park dismissed the idea that the shootings weren’t fueled by anti-Asian sentiment. Still, he said that his mother raised him to believe that people are fundamentally good, though "sometimes, things go horribly wrong."

It wasn’t immediately clear which of the Atlanta businesses employed Grant.

Her job was a sensitive subject, Park said, noting the stigma often associated with massage businesses. She told her sons that they should tell others she worked doing makeup with her friends.

Ultimately, Park said, he didn’t care what she did for work.

"She loved me and my brother enough to work for us, to dedicate her whole life," he said. "That’s enough."

Michels owned a business installing security systems, a trade he learned after moving to the Atlanta area more than 25 years ago.

He’d been talking about switching to a new line of work, but never got the chance. He was fatally shot at Youngs Asian Massage on Tuesday along with three others.

"From what I understand, he was at the spa that day doing some work for them," said Michels’ younger brother, John Michels of Commerce, Michigan.

Paul Michels also might have been talking with the spa’s owner about how the business operates, his brother said, because he had been thinking about opening a spa himself.

"His age caught up to him. You get to a point where you get tired of climbing up and down ladders," John Michels said. "He was actually looking to start his own massage spa. That’s what he was talking about last year."

Paul Michels grew up in Detroit in a large family where he was the seventh of nine children. His brother John was No. 8.

Though they were born 2 1/2 years apart, "he was basically my twin," John Michels said. Both enlisted in the Army after high school, with Paul joining the infantry.

A few years after leaving the military, Paul followed his brother to the Atlanta area in 1995 for a job doing low-voltage electrical work, installing phones and security systems. He also met his wife, Bonnie, and they were married more than 20 years.

"He was a good, hard-working man who would do what he could do to help people," John Michels said. "He’d loan you money if you needed it sometimes. You never went away from his place hungry."

They day before she was killed, Yaun dropped by Rita Barron’s boutique to say hello and show photos of her 8-month-old daughter.

"She told me, ‘I’m happy. I want another baby,’" said Barron, who had gotten to know Yaun from eating at the Waffle House where the new mother worked.

Yuan and her new husband returned Tuesday to the shopping center where Gabby’s Boutique is located, only this time they headed next door to Youngs Asian Massage. They had planned it as a day for Yaun to relax while a relative watched their baby girl.

Barron and her husband, Alejandro Acosta, heard gunshots from inside the boutique and later noticed that a bullet had gone through the wall. She called 911, and after police arrived Acosta watched them bring people out of the business, some bleeding and wounded. Among those who walked out was Yaun’s husband, unhurt but distraught. His wife had been killed.

"As you can imagine, he’s totally destroyed, without strength, doesn’t want to talk with anybody," said Acosta, who added that he had spoken twice with Yaun’s husband since the shootings.

Family members said Yaun and her husband were first-time customers at Youngs, eager for a chance to unwind.

"They’re innocent. They did nothing wrong," Yaun’s weeping mother, Margaret Rushing, told WAGA-TV. "I just don’t understand why he took my daughter."