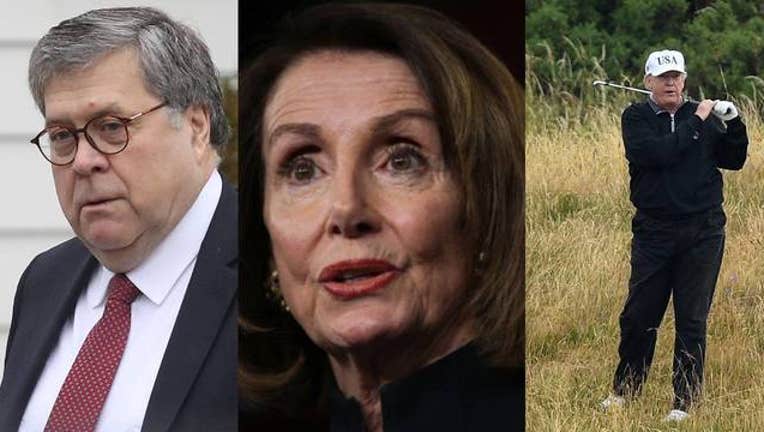 WASHINGTON (AP) - Attorney General William Barr has arrived at the Justice Department, House Democrats will gather by phone Saturday as they wait for the details, and President Donald Trump is on the golf course in Florida, all one day after special counsel Robert Mueller closed his 22-month-long Russia investigation with no new charges.

Barr says he could notify Congress of Mueller's "principal findings" as soon as Saturday. Mueller on Friday concluded his probe of Russian election interference and possible coordination with Donald Trump's campaign.

The special counsel's full report is confidential, but Barr says he will be deciding soon how much of it he will release to Congress and the public.

House Democrats will gather by phone on Saturday as they wait for the Justice Department to send them details of what special counsel Robert Mueller has found in his investigation of Russian interference.

That's according to a person familiar with the meeting. The person requested anonymity to discuss the private call.

Democrats planned the 3 p.m. conference call to discuss strategy and their next steps after they were notified Friday afternoon that Mueller had sent his completed report to Attorney General William Barr.

Barr said in a Friday letter to the House and Senate Judiciary committees that he would share Mueller's "principal conclusions" with Congress as soon as Saturday.

President Donald Trump is on the golf course in Florida a day after special counsel Robert Mueller closed his 22-month-long Russia investigation with no new charges.

Mueller delivered his long-awaited report Friday to the Justice Department, which was expected to release the main findings as soon as Saturday.

White House press secretary Sarah Sanders said Friday that the next steps are up to the attorney general and the White House will let the process take its course. As of Friday evening, the White House had not received or been briefed on the report.

Even with the details still under wraps, the end of the probe without additional indictments by Mueller was welcome news to some in Trump's orbit who had feared a final round of charges could ensnare more Trump associates, including members of the president's family.