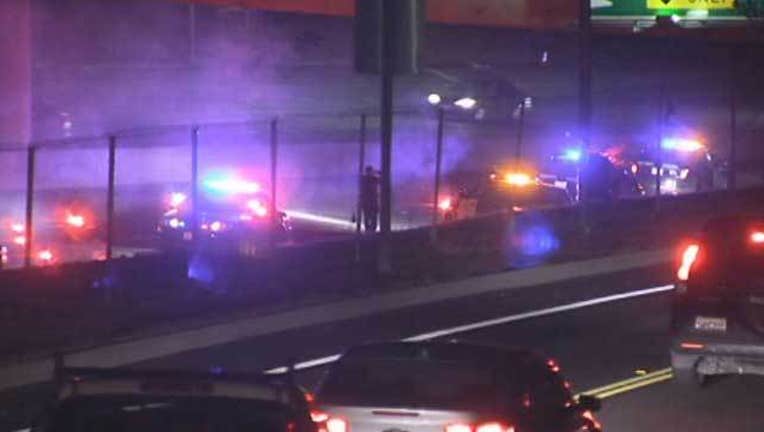 OAKLAND, Calif. (KTVU and wires) -- The California Highway Patrol is investigating the death late Thursday of a man found lying in a westbound lane of Highway 24 in Oakland as a fatal hit-and-run crash, CHP officials said today.

CHP received calls at about 9 p.m. of wood debris in the westbound lanes of State Highway 24, just west of the Caldecott Tunnel, according to CHP. A couple of minutes later CHP received calls that a pedestrian had been struck by a vehicle and was lying in a lane of traffic.

When officers arrived they found the person west of the Kay Avenue over-crossing and because of the person's injuries were unable to render medical aid, CHP officials said. The man was pronounced dead on the highway at about 9:10 p.m.

The Alameda County coroner's bureau is not yet releasing the name of the man. No other people were injured in the collision, according to CHP.

CHP officials said the pedestrian was struck several times by passing vehicles and the vehicle that first struck the man fled the area. A 2006 Ford Fusion driven by a 19-year-old San Leandro resident also hit the man and stopped and cooperated with officers, CHP officials said.

Officers closed westbound state Highway 24 at about 9:30 p.m. for about an hour and 40 minutes to complete an investigation.

Officers are investigating the death and asking anyone with information about the incident to call the CHP Oakland Area Office at (510) 450-3821 or the agency's non-emergency public access number at 1-800-TELL-CHP (835-5247).