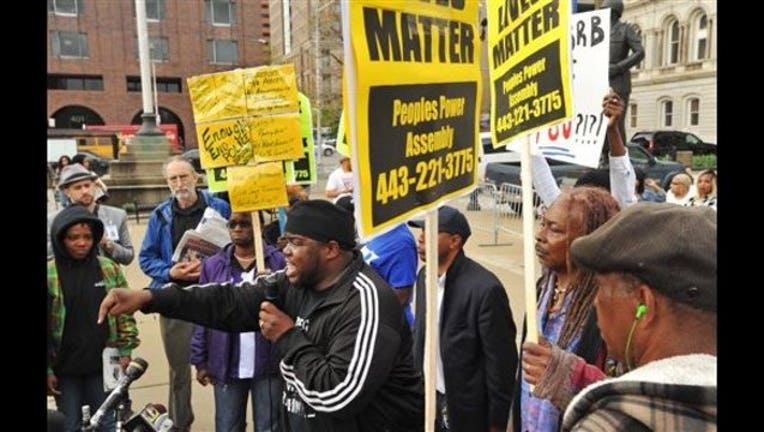 BALTIMORE (AP) — Police completed their investigation into the death of Freddie Gray a day earlier than planned Thursday and delivered it to the chief prosecutor in Baltimore, who pleaded for patience and peace while she decides whether to bring charges.

The deputy commissioner also revealed a new detail that raises still more questions about what the officers involved have told investigators: He said the van carrying Gray to the police station made a previously undisclosed stop that was captured on video by a "privately owned camera."

A grocery store owner told The Associated Press later Thursday that it was his closed-circuit security camera that provided the recording. Speaking in Korean, Jung Hyun Hwang said officers came in last week to make a copy, and that the only other copy was stolen, along with his video equipment, when looters destroyed his store Monday night.

He told the AP that he didn't see what the recording showed of the police van on April 12.

State's Attorney Marilyn Mosby must review the evidence, consider charges and decide how to move forward in the death of Gray, who suffered severe spinal injuries at some point after he tried to run from police on April 12, and died a week later.

Police Commissioner Anthony Batts took no questions and provided no details about the report, which he said represents the work of more than 30 investigators. Questions about the case must now go to Mosby, he said.

Batts said his officers would keep probing at the direction of the state's attorney, while Mosby stressed that her office is doing its own investigation.

"We are not relying solely on their findings but rather the facts that we have gathered and verified. We ask for the public to remain patient and peaceful and to trust the process of the justice system," her statement said.

Batts left it to Deputy Commissioner Kevin Davis to release yet another official timeline of what happened to Gray after his arrest nearly three weeks ago.

In all, the previously undisclosed stop now makes four stops between the time officers arrested Gray and his arrival at a police station, where he was found unresponsive. He was hospitalized in critical condition and died a week later.

Batts and Davis said nothing more about when or how investigators obtained the previously undisclosed video or learned about the additional stop. However, five of the six officers gave statements to investigators the day Gray was injured, and as recently as a week ago, the stop was not part of the official timeline, suggesting investigators learned of it later.

Gray was arrested after he made eye contact with an officer and ran. Officers chased him down and handcuffed him behind his back. Bystander videos recorded police loading him, dragging his legs, into one of two metal compartments in the back of the van.

Police earlier said the van stopped once so that officers could put Gray in "leg irons" because he had become "irate;" stopped again because the driver asked for an additional unit to check on Gray's condition, and then again to put an additional prisoner in the van's other compartment before arriving at the station.

Now police are saying an additional stop was made before the driver asked officers to check on his condition. They said nothing about this stop other than its location — a desolate intersection where the grocery store is surrounded by vacant lots.

Last week, Batts had said the second prisoner told investigators the driver did not speed, make sudden stops or "drive erratically" during the trip, and that Gray was "was still moving around, that he was kicking and making noises" up until the van arrived at the police station.

Mayor Stephanie Rawlings-Blake sought to dispel any notion that the police report would bring a swift and public conclusion to the case. "Whatever time the state's attorney's office needs to make that determination, the family wants to get it right," she said Wednesday after meeting with Gray's family and legal team.

"This family wants justice and they want justice that comes at the right time and not too soon," said Hassan Murphy, one of the family's lawyers.

Meanwhile, protests over Gray's death spread Wednesday night to other cities including Boston, New York and Washington, making it clear that tensions over the case are far from subsiding. The demonstrations were mostly peaceful, but police made many arrests, including at least 60 in New York.

Gray's death was only the latest high-profile case of a black man dying as the result of a police encounter. Similar protests erupted over the killings of Michael Brown in Ferguson, Missouri; Eric Garner in New York last year, and Walter Scott in South Carolina. Scott was shot in the back by a white officer who has since been charged with murder.