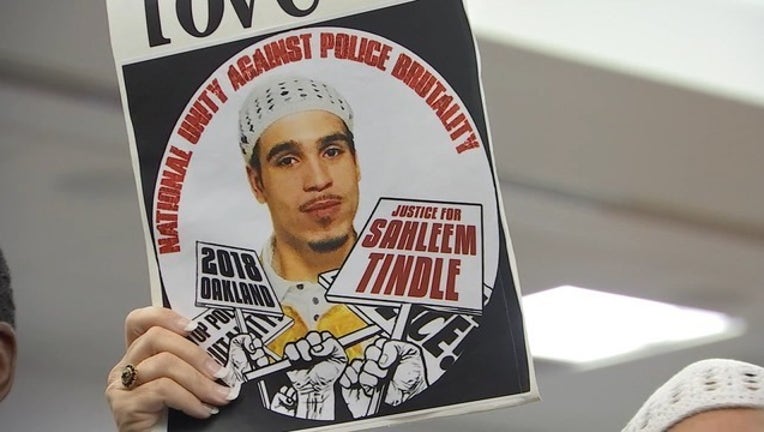 OAKLAND (BCN) A BART police officer who fatally shot 28-year-old Sahleem Tindle outside the West Oakland BART station in January is still eligible for promotion despite the controversy over his actions, transit agency officials confirmed today.

Officer Joseph Mateu put his name in to be considered for a promotion to field training officer in August 2017, according to BART spokeswoman Alicia Trost.

Then around 4:30 p.m. Jan. 3, Mateu shot Tindle three times in the back in the 1400 block of Seventh Street - just outside his department's jurisdiction - while responding to the sound of gunfire near the station.

Police initially said that Tindle was in possession of a handgun, but the killing led to shock and outrage after Mateu's body-worn camera footage, which was leaked to the public, called that claim into question,.

The shooting remains under investigation by the Oakland Police Department and the Alameda County District Attorney, however, and BART Police Chief Carlos Rojas has asked the community to withhold judgment until those investigations have been completed and all the facts are known.

At recent meetings of BART's board of directors as well as at the Citizen's Police Review Board - a civilian oversight body, dozens of Tindle's friends and family, accompanied by activists from the Anti Police-Terror Project, have been calling for Mateu to be fired.

Despite their calls for action, Rojas sent out a memo this week identifying Mateu as one of the officers eligible to attend a training course required to become a field training officer, Trost said.

"The memo did not say anything about him being selected to be a field training officer," Trost said.

Before that can happen, he would also have to complete the training course, pass a test and get selected for promotion.

That idea has Tindle's family and others following the case angry.

John Burris, the attorney representing Tindle's family, called it surprising that Mateu would be considered for promotion to field training officer given that the investigation into his actions on Jan. 3 has not yet concluded.

"It's a stunning movement," Burris said. "This raises questions about whether you can even trust the department."

Cat Brooks, an organizer with the Anti Police-Terror Project, said she's not surprised as it fits into a broader pattern of promoting officers who've engaged in wrongdoing - as has happened with some of the Oakland Police Department officers allegedly connected to the sexual exploitation of a teenage sex crime victim who went by the name "Celeste Guap."

"The community has said he needs to be fired, so they're going in the wrong direction," Brooks said. "All they're going to do is ignite the ire of the community. It just goes to show you that law enforcement places no value on black bodies."