Tom Vacar reports on how this stay-at-home order will impact the entire Bay Area region.

OAKLAND, Calif. (KTVU) - The entire Bay Area will be under a stay-at-home order effective at 11:59 p.m. Thursday as the region's ICU capacity has continued to fall.

The ICU capacity for the 11-county Bay Area region fell to 12.9% on Wednesday, triggering the mandatory stay-at-home order that forces restaurants to close indoor and outdoor dining rooms, tells retails stores to cut the number of shoppers allowed inside and places other restrictions on gatherings. 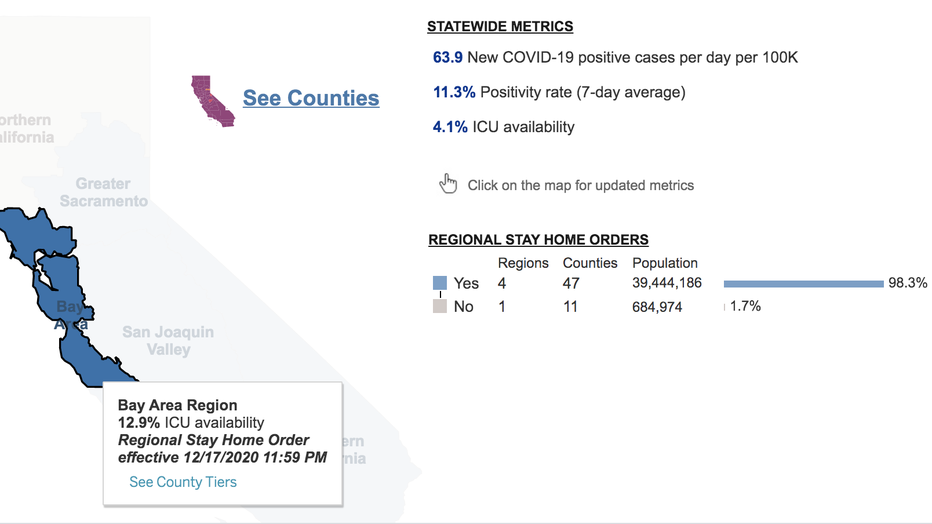 "The fact that the entire region is now under a mandatory stay-home order is just further evidence of how quickly the virus is spreading in the Bay Area and throughout the state."

As outlined by the state, the stay-at-home order will remain in effect for at least three weeks. After that period, the order will be lifted when a region’s projected ICU capacity meets or exceeds 15%. That will be assessed on a weekly basis after the initial three-week period.

Non-essential businesses must close, restaurants may only do take-out or deliveries, retailers are now restricted to 20% of their indoor capacity and socializing beyond your household is prohibited.

It's another tough turn for many businesses, who have no choice but to close.

"Your heart goes out to them. But right now, we're in life saving mode, and a vaccine is on the way and the actions we take today will save us," said San Mateo County Supervisor David Canepa.

"As long as everybody keeps their distance in the shop...I feel OK about it," said Atlas Skateboard Co-Owner Mike Manibis.

"I'm not saying it's foolproof but just follow the rules. It's like, what's the big deal? That's just how I feel," said skakeboard customer Julian Nieh.

First doses of COVID-19 vaccine given in Bay Area

Leading health officials have warned that the darkest days of the pandemic are still ahead.

"Our pandemic locally is out of control and our health care system is quite stretched, not at the breaking point, but marching steadily towards that point," Santa Clara County Health Officer Dr. Sara Cody said during a board of supervisors meeting on Tuesday, "We are truly, truly in the worst place we have ever been in this pandemic, by a very large margin."

The death rate is also increasing statewide and nationwide.

"300,000 people, and people won't wear a damn mask, they won't socially distance, they won't wash their hands, and they won't stay at home," said Canepa.

"What's certainly driving this is the social gatherings; something that we cannot regulate," said San Mateo County Manager Mike Callagy.

Yet, another major hurdle is coming.

"We're very, very concerned about Christmas gatherings. We are extremely concerned that we'll see a surge in the middle of a surge," said Callagy.

So now, only three of California's 58 counties: Plumas, Alpine and Mariposa remain in less restricted tiers. All the rest: purple, 99.9% of the population in the state.