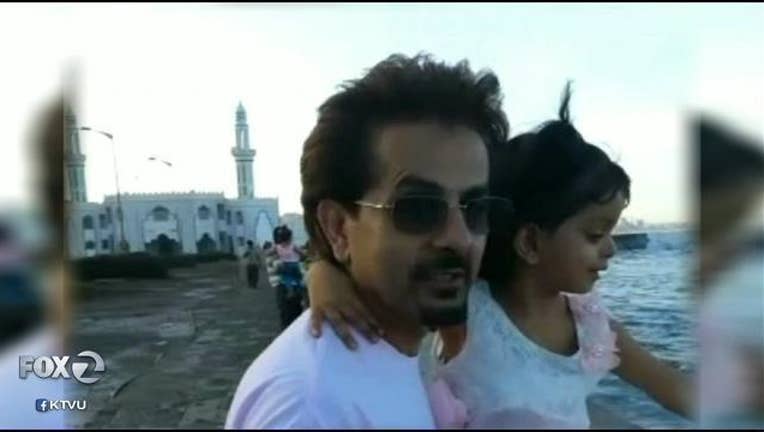 Family and friends of an Oakland man killed in Yemen this week gathered Saturday to remember him. Jamal Al-Labani was in Yemen to rescue his wife and young daughter from the violence there when he was killed in a mortar attack by rebels.

He's the first American killed in Yemen since the Civil War escalated. He arrived in the United States 20 years ago and lived in Oakland for 15 years.

"It's really bad," said Alazzani. "It's really sad. The community here is still shocked, even the warehouse where he grabbed groceries. They are all really surprised."

Tears well up in Alazzani's eyes when looking at his cousin Jamal al-Labani's three children knowing they'll grow up without a father. His cousin also had another child on the way he'll never meet.

"He was a solid, quiet guy," said Alazzani. "He was always try to stay away from problems. He doesn't get in anybody's business."

Labani, who was in his 40's, had traveled to Yemen to visit his wife and two year old daughter. The Oakland gas station owner was walking home in the city of Aden from a mosque when he and his 14-year-old nephew were hit by mortars. Both of them died.

Shiite rebels are believed to be responsible for the bombing in a country torn by constant political strife. Alazzani feels the U.S government let his family down.

"If they were American Caucasians, it will probably be a different story," said Alazzani. "I don't know if Yemen Americans are considered real Americans or not?"

The Bay Area Council on American-Islamic Relations is calling for the evacuation of all U.Sz citizens in Yemen and wants the U.Sz government to open up its diplomatic channels.

"We have the largest military in the world by far," said Zahra Billoo of CAIR. "So to see other smaller, less stable countries are able to get their citizens out and the U.S. government is saying it's impossible is difficult to believe and very disappointing."

Alazzani hopes the U.S. government will take immediate action as he fears lives of other Yemeni-Americans will be lost.

"If we don't act, things will get worse and worse," said Alazzani. "We will hear more American citizens that will pass away."

The U.S. State department reportedly has travel advisories in Yemen but has said it can only provide limited assistance given the U.S. Embassy there is now closed.