Many from the Lebanese community gathered for a vigil Thursday along San Francisco's waterfront to honor the victims of the explosion in Beirut. 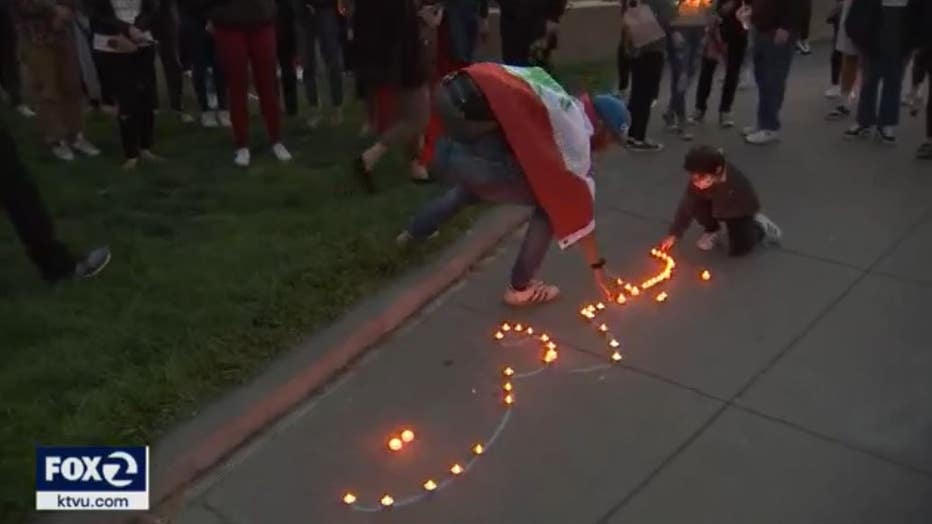 SAN FRANCISCO - In San Francisco Thursday night, Lebanese Americans and ex-pats gathered at the Embarcadero to honor and mourn victims at a vigil for the Beirut explosion.

Organizers say the Lebanese people are resilient but have gone through a lot and they need help.

Joey Diab, a Lebanese American tells KTVU he received devastating news, "The 3-year-old daughter of my best friend, my childhood friend, passed a couple minutes ago."

By phone from Lebanon,  Mazen Andary says he felt the explosion as he was driving on the freeway about six miles from Beirut.

"I felt like I was going to be thrown outside my car. The sound was really, really so huge," says Andary. "There was huge black smoke. Then it started to turn. I can see an orange color covering the whole sky."

The business man says he thought that a war had started.

"It was really so scary. we didn't know what was going to be the next step."

He took photos of the devastation.

Cafes and restaurants in the city's vibrant downtown were destroyed.

"It's in shambles," said Sophia Andary, a Lebanese American shares with KTVU video of a home that belongs to a friend's brother damaged by the explosion.

Authorities say the blast occurred when a fire at a warehouse at the waterfront ignited an explosive material that had been stored at the site for years.

"I've been crying," said Sophia, that Lebanon was already struggling with high unemployment and dealing with Covid-19. This explosion is yet another blow.

"It is in economic collapse. What people do not realize is that people are starving in that country right now," said Sophia.

At the vigil, there was a song for the victims.

"Empowering to see the community come together over there, literally on the street picking up the rubble, rescuing the bodies. It's inspiring to see that," said Carmen Antoun, a Lebanese American.

Many members of the Bay Area Lebanese community attending the vigil say they have family who live in or near Beirut.

Organizers say the best way to donate is directly to the Lebanese Red Cross.