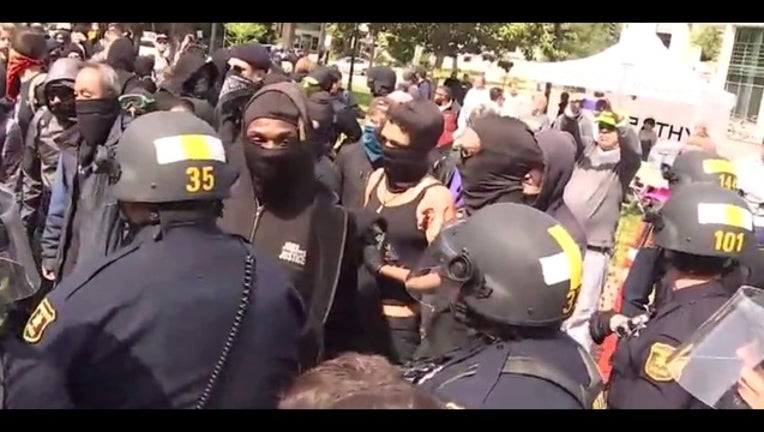 Dueling pro- and anti-Donald Trump protests turned violent on April 15, 2017 in Berkeley. Several people were arrested and several were hurt during the melee.

BERKELEY (BCN) -- Berkeley police Chief Andrew Greenwood is defending his department's response to rallies for and against President Donald Trump on Saturday that resulted in 20 people being arrested and 11 people being injured.

In a lengthy memo to Mayor Jesse Arreguin and the City Council this week, Greenwood said, "Our responsibility in this situation is to act with deliberation, and keen awareness of context, of what actions we're taking and why, and of what effect or reaction our actions may generate."

He said, "We are rightly expected to not get swept into the volatility of the crowd. This is in keeping with the values of our community and the best-informed practices of law enforcement across the country, in a time where community trust in our actions is absolutely essential."

Several hundred demonstrators and counter-demonstrators gathered at the Martin Luther King. Jr. Civic Center Park for the rallies on Saturday.

Similar rallies were held at the park on March 4 and resulted in 10 people being arrested.

Referring to Saturday, Greenwood said, "We found that once again large elements of the factions arrived in the area armed and prepared to fight."

Greenwood said at least eight officers were injured while responding to the rallies, including several officers who reported hearing loss caused by having illegal explosives thrown at them, exposure to pepper spray and a knee injury.

"Investigations into several felonious assaults is focusing on identifying and apprehending the suspects in these cases," he said.

Greenwood said there were "multiple assaults between elements of the crowd" and people on both sides "actively sought confrontations with those with opposing views."

The chief said that although his department had asked people to separate themselves from people who commit violence, "crowds of onlookers and video recorders were suffused throughout the event, frequently placing themselves in very close proximity to those who were fighting."

Greenwood said that "made managing the event considerably more complex for our department."

"A fight within a volatile crowd is not a simple matter in which to intervene. Intervening on intermixed croups of armed participants fighting or eager to fight presents challenges," he said.

"Intervention requires a major commitment of resources, a significant use of force and carries with it the strong likelihood of harming those who are not committing a crime," he said.

He said Oakland police provided security for Berkeley City Hall, around which most of the confrontations were taking place, and allowed Berkeley police to focus on the protesters.

Greenwood added, "It's important to note that no uninvolved community members were injured and there were no reports of violence or vandalism outside of the Center Street area."