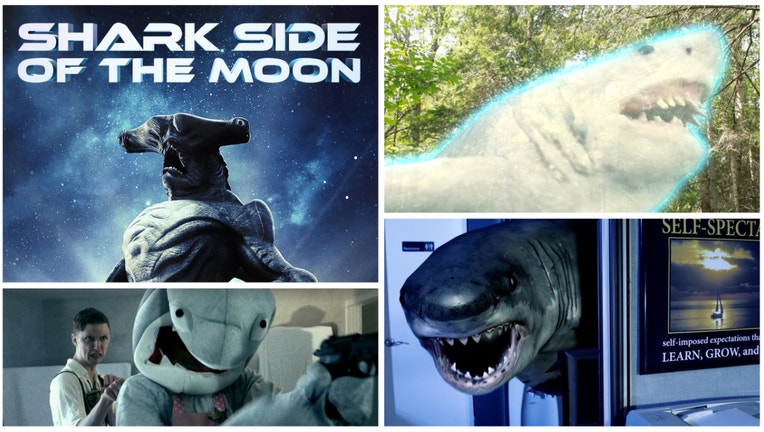 Las Vegas - There was a time when all you needed for a shark movie was a dangerous great white shark and some people on whom said shark could chow down. But in our post-"Sharknado" existence, the proliferation of low-budget shark-attack thrillers (a genre that’s been dubbed "sharksploitation") means that each shark movie needs more than sharks to stand out. That’s led to more ridiculous shark movie premises and to even more ridiculous, often shark-pun-based shark movie titles. Here are some of the most absurd shark-centric titles and concepts, each designed to grab viewers’ attention like a shark’s jaws might grab onto their legs with their sharp shark teeth — and you can watch most of them for free.

Still hungry for more (much like a shark)? Check out an abundance of shark-centric movies and TV shows streaming for free as part of Tubi's annual Shark Month: Bitefest.

Portmanteaus are popular in creature features, and "Sharktopus" is one of the catchiest. The combination of shark and octopus looks cool, even if it isn’t all that practical, and one such creature wreaks plenty of havoc after escaping from a military facility.

"Sharktopus" is streaming free on Tubi — get the app

Shark Side of the Moon (streaming free on Tubi)

It’s one small step for man, one giant leap for sharks, who apparently inhabit the moon. These mutant sharks were created by Soviet scientists and sent to the moon, where they await unsuspecting American astronauts.

The low-rent special effects are part of the story in this parody about a pair of filmmakers whose shark-movie screenplay comes to life. Just because they’re being chased by a poorly rendered bit of CGI doesn’t make it any less dangerous.

"Bad CGI Sharks" is streaming free on Tubi — get the app

Shark Encounters of the Third Kind (streaming free on Tubi)

Aliens land on Earth with a plan: to use mind-controlled sharks to attack humanity, obviously. The invasion starts in one small town, which makes it more manageable for the aliens — and for the filmmakers.

There are a lot of risks to consider when buying a house, but encountering a shark is usually not one of them. That’s not the case in this movie, which centers on a homeowner who must rid his house of an unlikely infestation.

"House Shark" is streaming free on Tubi — get the app

Combining the women-in-prison genre with the shark-attack genre bridges two generations of exploitation movies. Don’t expect to see an actual prison on-screen here, but it does have impractically-dressed escapees being stalked by swamp sharks.

Playing around with a Ouija board is never a good idea in a horror movie, but when you’re in a shark horror movie, you end up summoning the spirit of a dead great white shark, which is no longer confined to the water.

"Ouija Shark" is streaming free on Tubi — get the app

"Shark Exorcist" is streaming free on Tubi — get the app

Raiders of the Lost Shark (streaming free on Tubi)

Indiana Jones hated snakes, so maybe he would have hated sharks, too. He’s not in this movie, though, nor is anything related to his pulp-style adventuring. Instead, there’s a genetically engineered shark hunting humans.

Why just have one type of deadly shark when you can have them all mashed up into one stitched-together monstrosity? Created by Nazis (of course), Sharkenstein is reanimated to terrorize the residents of a small seaside town.

"Sharkenstein" is streaming free on Tubi — get the app

Later movies in this series feature sharks with three, five and six (but not four) heads, but the multi-headed shark dynasty begins here, with the two-headed shark menacing a boat full of college students on an "educational" trip.

Sharks of the Corn (streaming free on Tubi)

Credited to "Steven Kang," this movie has nothing to do with Stephen King’s "Children of the Corn," which itself has become a low-budget horror franchise. It does feature sharks among cornfields, though.

Even people unfamiliar with the B-movie shark genre know about this franchise-spawning movie about a freak weather pattern that dumps deadly sharks on Los Angeles, where they face Ian Ziering and Tara Reid. Multiple sequels ensue.

WATCH FREE ON TUBI: "Sharknado" gets the RiffTrax treatment in "RiffTrax Live: Sharknado" — get the app

If there’s a "Sharkenstein," there must be a "Sharkula" (because they come from the same director). Count Dracula passes his vampire curse on to a great white shark, just as Bram Stoker would have intended.

"Sharkula" is streaming free on Tubi — get the app

"Sky Sharks" is streaming free on Tubi — get the app

This Christmas-themed shark movie is surprisingly wholesome, as an outcast kid finds a magical pen that brings his comic-book creation Santa Jaws to life. Sure, the conjured creature tries to kill the kid’s family, but it also wears a Santa hat!

WATCH FREE ON TUBI: "Jurassic Shark 2: Aquapocalypse" — get the app

About the writer: Josh Bell is a freelance writer and movie/TV critic based in Las Vegas. He’s the former film editor of Las Vegas Weekly and the former TV comedies guide for About.com. He has written about movies and TV for Vulture, Polygon, Inverse, Crooked Marquee, and more. With comedian Jason Harris, he co-hosts the podcast Awesome Movie Year.