Among the president's new initiatives is directing all federal pharmacy partners to begin walk-in hours and he’s calling on local governments to do the same. KTVU's Andre Senior reports.

OAKLAND, Calif. - The next phase of President Biden’s vaccination push was announced on Tuesday afternoon and will focus on three key areas.

White House plans call for getting a vaccine approved for children 12 to 15 years of age, make it more convenient to get vaccinated, and targeting Americans who are unsure about getting the shot.

"Our goal by July 4th is to have 70% of adult Americans to have at least one shot, 160 million Americans fully vaccinated," said President Biden.

President Biden’s announcement from the White House Tuesday comes his administration tackles the vexing problem of winning over the doubters and those who are reluctant to get inoculated.

Among the president's new initiatives is directing all federal pharmacy partners to begin walk-in hours and he’s calling on local governments to do the same. 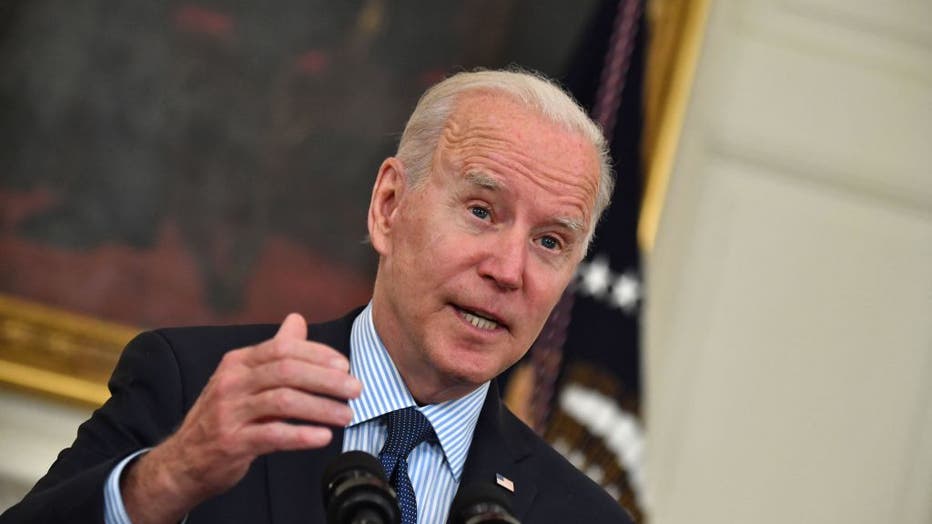 US President Joe Biden speaks about the Covid-19 response and the vaccination program in the State Dining Room of the White House on May 4, 2021. (Photo by Nicholas Kamm / AFP) (Photo by NICHOLAS KAMM/AFP via Getty Images)

"We’re also encouraging our state and local partners to have a walk-in ability as well to the sites that they run," the president said.

States get their vaccine allocation based on their share of the U.S. population from the federal governments, but Mister Biden announced that going forward doses that states choose not to order will become available to other states.

Part of the new focus will be to increase vaccine availability in rural areas.

Another part of the plan to curb persistent hesitancy about vaccines calls for partnering with major league sports teams for stadium vaccination and grocery stores.

"We’re working with major businesses like grocery stores to provide special deals like discounts to shoppers who come to their stories to get vaccinated," said Mr. Biden during a press conference at the White House Tuesday.

The question remains as to whether the effort will lead an end game to the virus, which would signal a return to pre-pandemic life remains to be seen, but the experts are encouraged.

"If we can get 70% vaccinated, I think it will get us a long way toward herd immunity and it will also decrease transmission," Dr. George Rutherford, a professor of epidemiology at the University of California San Francisco.

The number of fully vaccinated Americans stands at 31.8 percent, according to the Centers for Disease Control.

In the Bay Area, 83% of eligible Marin Co. residents have been inoculated, while 72% of San Franciscans have received their doses and 70% for Santa Clara Co.