WASHINGTON - President Joe Biden on Tuesday announced a number of new actions in the face of the rapidly-spreading omicron variant of the coronavirus, including access to 500 million free at-home COVID-19 tests for Americans, increased support for overwhelmed hospitals and more vaccination sites nationwide.

As families and friends begin to gather together amid a second straight holiday season with COVID-19, scientists are racing to better understand the omicron variant and whether it causes more serious disease. They do know that vaccination should offer strong protections against severe illness and death, which public health officials continue to push heading into the cold winter months.

"If you’re not fully vaccinated, you have good reason to be concerned," Biden said in remarks from the White House. "Almost everyone who has died from COVID-19 in the past many months has been unvaccinated."

The president previously laid out his COVID-19 winter plan, which included reimbursement for at-home tests. Now in the face of the omicron variant, which has quickly become the dominant strain in the U.S., the president has pledged further action. 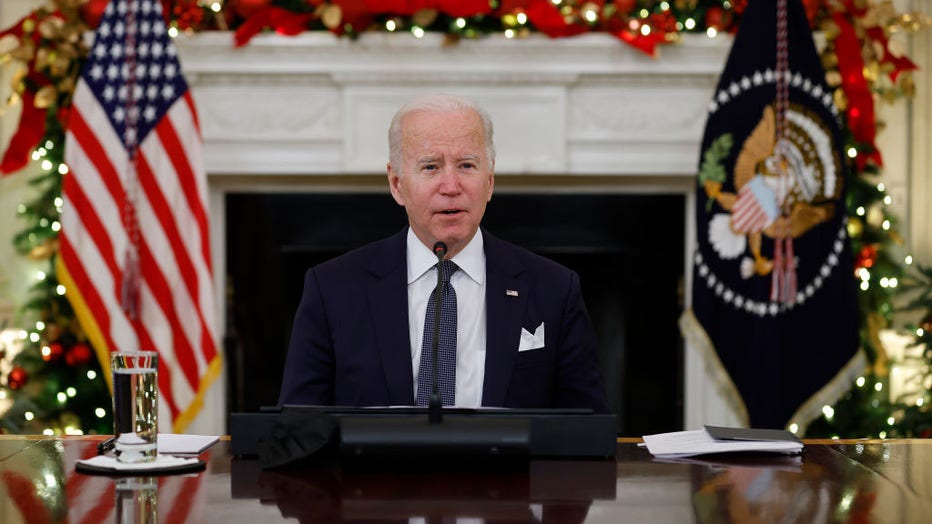 President Joe Biden delivers brief remarks before a meeting with his coronavirus response coordinator Jeffrey Zients and members of the White House COVID-19 Response Team in the State Dining Room at the White House on Dec. 9, 2021, in Washington, D.C

A major update to his plan is the decision for the U.S. government to purchase half a billion at-home, COVID-19 rapid tests and ship them free to Americans beginning in January. People will use a new website to order their tests, which will then be sent to them by U.S. mail. That marks a major shift for the president, whose earlier plan had called for many Americans to purchase the hard-to-find tests on their own and then seek reimbursement from their health insurance.

Public health experts had criticized Biden's initial approach as unwieldy and warned that the U.S. would face another round of problems with testing at a critical time. They pointed to other advanced countries such as the United Kingdom, where the government ensures access to testing. In the U.S., rapid tests for at-home use are much more expensive than in Europe, and they have proved to be frustratingly hard to find in stores.

The federal government will also establish new testing sites, with the first coming to New York City this week, and use the Defense Production Act to help manufacture more tests, the White House said.

To help COVID-19 burdened hospitals, the U.S. will deploy an additional 1,000 service members, including military doctors, nurses, paramedics and other medical personnel, to hospitals during January and February as needed.

Biden also announced six emergency response teams, which include more than 100 clinical personnel and paramedics—who have started deploying to Michigan, Indiana, Wisconsin, Arizona, New Hampshire and Vermont. These response teams are in addition to the 300 federal medical personnel that previously were deployed at the arrival of the omicron variant.

There are also plans to send out additional ventilators and equipment from the national stockpile, expanding hospital capacity to handle infected patients.

Last week, the government sent 330 ventilators to states like Indiana, Michigan, Maine, and New Hampshire "with more planned deliveries on the way to states that are facing strains and need them," the White Josue said.

The administration will also stand up new vaccination sites nationwide and provide hundreds of personnel to administer shots. FEMA will help open additional pop-up sites "in areas of high demand" over the coming weeks.

New rules will make it easier for pharmacists to work to aid the public health efforts outside their communities. Specifically, the U.S. Department of Health and Human Services will issue an amendment to the PREP Act Declaration, "allowing flexibility for pharmacists and pharmacy interns to administer a wider set of vaccinations across state lines."

Scientists stress that vaccination is still the best approach to keep Americans safe from omicron. For those who are already fully vaccinated, a booster shot has been shown in lab tests to provide strong protection against the variant.

Although reports of breakthrough cases abound, data show that vaccinated people who become infected are much less likely to suffer serious disease leading to hospitalization or death. To the unvaccinated, Biden said they have "an obligation" to themselves, their families and "to your country."

"Get vaccinated now. It’s free," the president said, adding that if they’re eligible, get the booster shot too.

Biden has found himself in the delicate position of both alerting the country to the dangers posed by omicron and reassuring Americans that the vaccines will protect them. White House officials are looking to ease the nation back toward accepting the reality of an endemic virus with far lower stakes for the vaccinated. This has meant setting a difficult balance as cases rise and as deaths and serious illness among the unvaccinated dominate headlines.

Biden on new COVID-19 rules as omicron variant reaches US

President Joe Bidden addressed the arrival of the omicron variant in the United States and what that means for safety protocols.

Highlighting how widespread COVID-19 is at the moment, the White House issued a statement on Monday that Biden had been in close contact with a staff member who tested positive for the virus. The "mid-level staff member" had spent about 30 minutes around Biden on Air Force One, on a trip from Orangeburg, South Carolina to Philadelphia, Pennsylvania.

"This staff member is fully vaccinated and boosted, and tested negative prior to boarding Air Force One, as is required for everyone traveling with the President," press secretary Jen Psaki said. "This staff member did not begin to experience symptoms until Sunday, and was tested on Monday."

Biden is tested on a regular basis and received an antigen test on Sunday, which tested negative, Psaki said. He took another test Monday morning which showed a negative result after learning the staffer had contracted the illness.

"As CDC guidance does not require fully vaccinated people to quarantine after an exposure, the President will continue with his daily schedule," a statement continued.

There are 40 million eligible but unvaccinated American adults. Efforts to increase vaccination rates have struggled to overcome a series of political, social and cultural divides.

"Our health experts assess that you are 14 times more likely to die of COVID if you have not been vaccinated versus vaccinated," Psaki said Monday.

Scientists say omicron spreads even easier than other coronavirus strains, including delta. Last week, it already accounted for nearly three-quarters of new infections, according to data from the U.S. Centers for Disease Control and Prevention.

Early studies suggest that the vaccinated will need a booster shot for the best chance at preventing an omicron infection but that even without the extra dose, vaccination should still largely protect people from serious sickness or death.

Outside the U.S., the Dutch government began a tough nationwide lockdown on Sunday to rein in sharply rising infections — but many European leaders have opted for something less. British Prime Minister Boris Johnson said officials have decided against imposing further restrictions, at least for now.

France and Germany have barred most British travelers from entering, and the government in Paris has banned public concerts and fireworks displays at New Year’s celebrations. Ireland imposed an 8 p.m. curfew on pubs and bars and limited attendance at indoor and outdoor events, while Greece will have 10,000 police officers on duty over the holidays to carry out COVID-19 pass checks.

In Spain, the national average of new cases is double what it was a year ago. Neighboring Portugal is telling most nonessential workers to work from home for a week in January.

Israel on Monday moved to ban travel to the U.S., Canada and eight other countries amid omicron’s global spread.