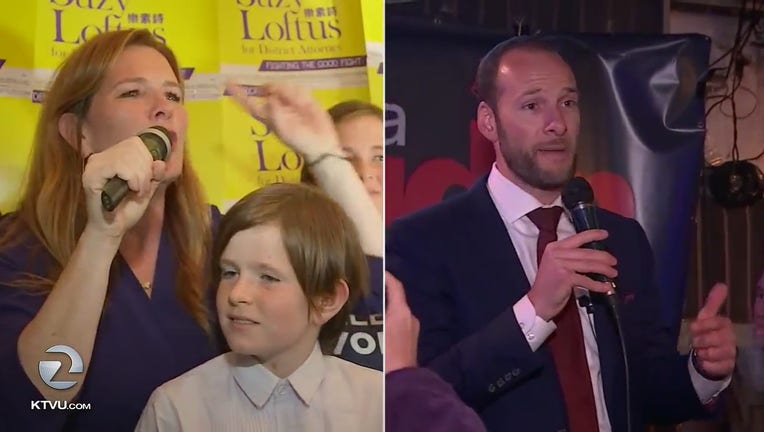 the SF district attorney's race has been tight since Tuesday. As of Friday Chesa Boudin has once again taken the lead.

SAN FRANCISCO - In a surprising turn of events, the latest results from Tuesday's election show Chesa Boudin taking a slight lead over Suzy Loftus in the race for San Francisco District Attorney.

The two candidates are only separated by 156 votes.

As of Friday, Chesa is in the lead with 50.05 percent of the votes. Just as of Thursday, however, Loftus led the race with a 50.33 percent lead.

Boudin responded to the latest numbers on Twitter, saying, "San Francisco!! We are all feeling the momentum for change in this city!"

Candidates Nancy Tung and Leif Dautch have already been eliminated due to ranked-choice voting.

Meanwhile Proposition D, the only citywide ballot measure that seems to be in question, appears to be passing narrowly.

Currently, 67.58 percent of the voters voted in favor of the proposition, while 32.42 percent voted to oppose it.

The measure, which would impose a 3.25 percent tax to single rides or a 1.5 percent rate to shared rides for companies like Uber and Lyft, needs two-thirds majority approval to pass.

According to officials with the city's Department of Elections, the department still has to process 15,500 ballots. That number includes about 1,500 vote-by-mail ballots and about 14,000 provisional and conditional voter registration ballots.