Matteo Lambert has ran 120 miles in 35 races across the country this year.

Matteo Lambert, of Vienna, Virginia, is also starting his own organization to continue his passion of helping others.

Matteo began running at 7-years-old when he participated in his first 5K race, according to his father, Brandon Lambert. Matteo completed the race, and soon started signing up for more. 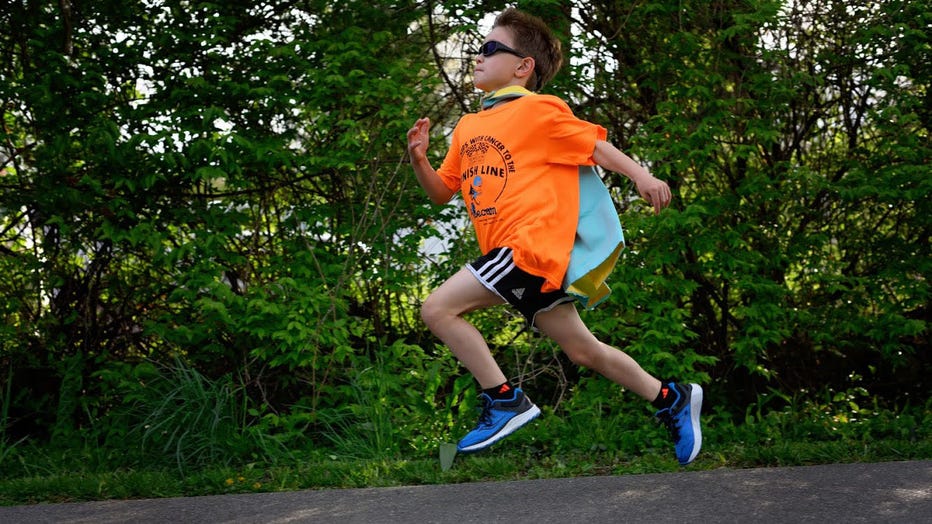 Matteo Lambert, 9, has ran more than 120 miles this year and counting in charity races across the country with the goal of raising money for children with cancer. (Photo credit: Provided / Melody Yazdani Studios)

“It was pretty clear that at 7, he not only enjoyed it, but he was pretty good at it,” Brandon recalled.

Matteo, whose grandfather is a prostate cancer survivor, participated in a race for prostate cancer in June 2017. He finished second in his age group, and as Brandon recalls, his young son wasn’t participating for a prize.

“I turned to him and said, ‘Hey buddy, you have to stick around and get your medal,’” Brandon said. “He turned to me, completely unprompted, and said, ‘It’s okay, Daddy. We can leave. This isn't about awards. It's about helping other people.'”

Matteo’s father later connected him with Len Forkas, an endurance athlete and the founder of Hopecam — a nonprofit that helps children in treatment for cancer stay connected with friends and school through online video.

Matteo and Forkas kept in touch with the help of his father, and the young boy decided he wanted to help the Hopecam charity through his love of running.

In the beginning of 2019, Matteo set an initial goal of running 100 kilometers (about 62 miles) — but later changed it to 100 miles after the family realized he would hit his goal early.

“We found out that most Americans can’t appreciate what a kilometer is,” Brandon explained. “They know if you run a 5K, but they can’t visualize it.”

The family aimed to raise $5,000 for Hopecam, but Matteo soon met that number by his second race — receiving most of the monetary donations from strangers on Facebook.

Matteo’s racing has brought him many memorable experiences too. While participating in a 5K in Chicago, Matteo met Cubs first basemen Anthony Rizzo and asked him for a “moonshot” on behalf of the group running to raise money for kids with cancer. Rizzo, a Hodgkin’s lymphoma survivor, ended up hitting a grand slam that game against the San Diego Padres.

“That was for him,” Rizzo said after the game.

Matteo was even recognized by former Vice President Joe Biden, who sent the boy a letter commending him on his efforts.

With the help of his family and the Core Foundation, Matteo is now also starting his own organization called the Off the Charts Club where he aims to continue helping and visiting children with cancer in hospitals throughout the country while participating in charity races.

“Off The Charts Club embraces the notion that there are no age or size requirements for helping others,” the website reads.

As part of the Off the Charts Club, Matteo’s father explained that they hope to publish an inspirational children’s book to do readings and give to patients at hospitals they visit.

“He’s kind of the adult in the house. He’s been a very easy child to parent,” Brandon explained of his son. “Matteo has just always wanted to help people who are less fortunate.”

Those interested in donating to the Off the Charts Club can do so here.