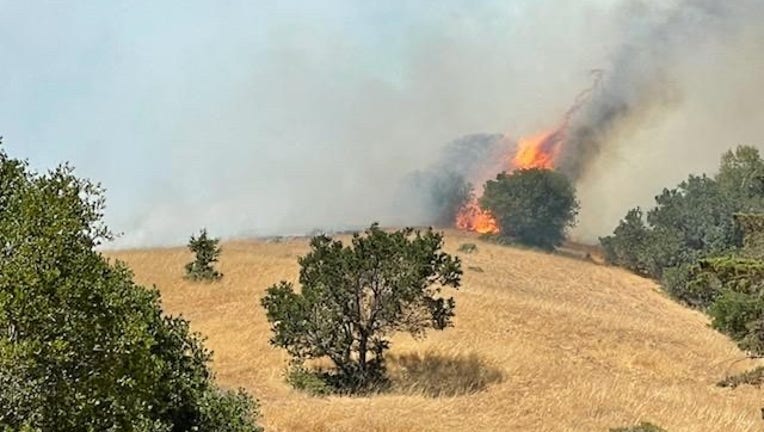 MARIN COUNTY, Calif. - Forward progress has been stopped at a brush fire in Marin County on Wednesday. The Lassen Fire prompted authorities to order evacuations in Lucas Valley. Those orders have since been lifted.

Marin County Sheriff sent a Nixle alert out at 2:25 p.m. The fire broke out near Mt. Lassen Drive, according to the San Rafael Police.

Shortly after 3 p.m., air support arrived at the scene. That aerial support was released when firefighters got the upper hand.

The fire was burning away from structures and moving up a hill at a "slow/moderate rate of speed," according to the San Rafael Fire Department.

A wildfire in Marin County's Lucas Valley prompted limited evacuations on Wednesday. Firefighters from multiple agencies gained the upper hand and have 80% containment on the 30-acre grassfire.

Sgt. Brenton Schneider with the Marin County Sheriff's Department said crews were still working hotspots, but he expected 100% containment to be achieved by Thursday morning. Firefighters are  expected to stay at the scene overnight.

Sgt. Schneider said there was no damage reported and that the fire was contained to vegetation. The cause of the fire is under investigation.

Marin County Sheriff's Office was coordinating the evacuations that were at first orders, but then later downgraded to warnings.

The evacuations were for homes north of Lucas Valley Road between Las Gallinas Avenue and Bridgegate Drive, north to Marinwood open space. Marin County Fire said if you are evacuated, that you should head to Highway 101.

Marin County Fire is the lead agency in the fire fight, according to Cal Fire. Other agencies involved include, San Rafael Fire Department, Marinwood Fire and other nearby agencies.