Moscow police announce arrest of Bryan Kohberger, 28, charged with murders of four University of Idaho students; he is jailed in Pennsylvania and is set to appear in court next Tuesday.

HARRISBURG, Pa. - A suspect in the murders of four University of Idaho students was arrested early Friday in Pennsylvania, police in Pennsylvania and Idaho said.

Bryan Christopher Kohberger, 28, was taken into custody by local police and the FBI at his parents' home in the gated community of Indian Mountain Lake in Albrightsville, Pennsylvania.

A suspect in the killings of four University of Idaho students was arrested in eastern Pennsylvania, a law enforcement official said Friday. Arrest paperwork filed in Monroe County Court said Bryan Kohberger, 28, was being held for extradition to Idaho where he faces a first degree murder charge.

Kohberger was being held for extradition in Monroe County Court for four counts first-degree murder and a felony burglary charge filed by Latah County Prosecutor's Office in connection to the slayings of Ethan Chapin, 20, Xana Kernodle, 20, Kaylee Goncalves, 21, and Madison Mogen, 21.

Shanon Gray, an attorney representing Goncalves's father, Steve Goncalves, said law enforcement officials called the family last night to let them know about the arrest, but gave no additional information about how or why they believe he might be connected to the murders.

"Obviously they’re relieved that someone has been arrested," Gray said. "You guys know about as much as we do right now."

At a press conference Friday afternoon, prosecutors and police said state law prevents them from releasing information about what led to Kohberger's arrest until he's back in Idaho and has had his first appearance in court.

"We hope to get that to you as soon as we can," county prosecutor Bill Thompson said.

Once he's back in Idaho, he'll have another initial court appearance there.

WATCH LIVE: LiveNOW from FOX will stream the press conference here in its entirety.

Moscow, Idaho, Police Chief James Fry said investigators received more than 19,000 tips and conducted over 300 interviews. He said he "recognized the frustration" with the lack of information released to the public, but doing so would have tainted the investigation or alerted Kohberger, he said.

Fry said police were still looking for a murder weapon, but they found the white Hyundai Elantra they were seeking during the investigation.

"Be assured the work is not done, this has just started," he said.

Fry declined to answer when asked what tips and evidence led to the arrest, citing the investigation and Idaho state law. He said he couldn't release a motive.

Asked whether police believe the "community is safe" following Kohberger's  arrest, Fry said yes, but "we need to remain vigilant."

"We have an individual in custody who committed these horrible crimes," he said.

A cleaning crew arrived Friday morning at the home where the murders took place, but Fry said the cleaning work was later halted at the court's request.

Who is Bryan Christopher Kohberger? 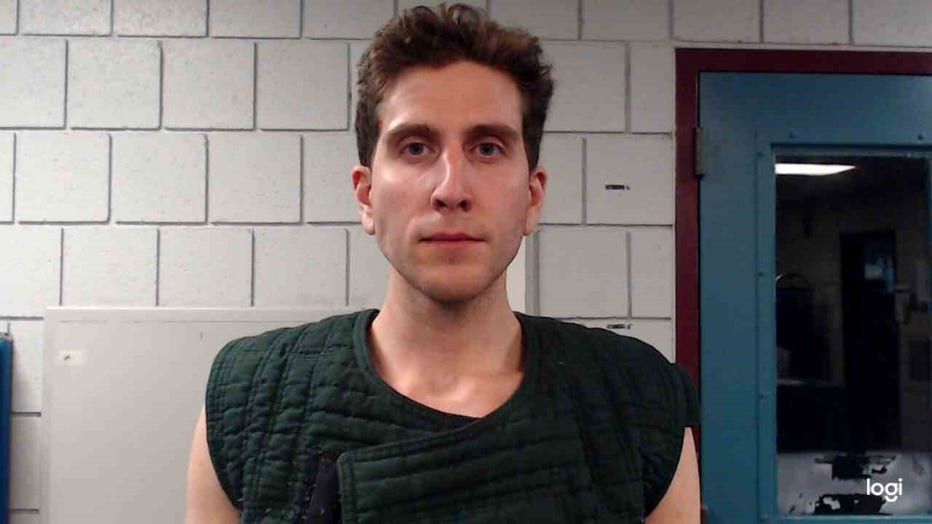 Photo shows Bryan Kohberger, 28, who was being held for extradition in a criminal homicide investigation in the killings of four University of Idaho students. (Credit: Monroe County Correctional Facility)

The suspect is a Ph.D. student at Washington State University's Department of Criminal Justice and Criminology in Pullman, Washington, police said. Pullman is about a 15-minute drive from the rental home where the four students were stabbed to death.

Ben Roberts, a graduate student in the criminology and criminal justice department at WSU, described Kohberger as confident and outgoing, but said it seemed like "he was always looking for a way to fit in."

"It’s pretty out of left field," he said of the news Friday. "I had honestly just pegged him as being super awkward."

Roberts started the program in August — along with Kohberger, he said — and had several courses with him. He described Kohberger as wanting to appear academic.

"One thing he would always do, almost without fail, was find the most complicated way to explain something," he said. "He had to make sure you knew that he knew it."

Kohlberger registered as a Libertarian in Albrightsville, Pennsylvania in 2013, public records show. He does not appear to have a criminal record, according to FOX News Digital.

Kohlberger has two sisters and graduated from Northampton Community College in Pennsylvania with an associate of arts degree in psychology in 2018, said college spokesperson Mia Rossi-Marino.

He graduated from DeSales University in Allentown, Pennsylvania, with a bachelor's degree in 2020 and a master's degree in criminal justice in 2022. The university released the following statement about Kohlberger's arrest:

"As a Catholic, Salesian community, we are devastated by this senseless tragedy. Our thoughts and prayers are with the victims' families during this difficult time," the university said in a prepared statement.

ABC reported that a SWAT team early Friday morning descended on the home owned by Kohberger’s parents in Pennsylvania, which is near several ski resorts and the Pocono Raceway, to take him into custody. The Indian Mountain Lake website informed residents of the FBI raid.

Across the country, police in Washington state also served a search warrant at Kohberger's apartment on Friday morning in Pullman.

A neighbor told FOX News Digital that investigators had already arrived by 7:30 a.m. local time. There were at least two unmarked law enforcement vehicles at the scene as police from Washington State University, Moscow, Idaho, and other agencies were executing the warrant.

Bill Thompson, the Latah County prosecutor, was also seen outside the apartment alongside investigators, gearing up with protective booties before heading into the residence.

Video shows the scene on Dec. 30, 2022, outside of the Washington apartment of Bryan Christopher Kohberger, the man taken into custody in connection with the stabbing deaths of four University of Idaho students. Credit: FOX News Digital

"There was the black pickup and the silver pickup and a couple of cops, and they were taking pictures and stuff, but didn't have any tape up," Randy Smith, a 58-year-old Moscow resident who works at WSU, told FOX News Digital.

An arrest affidavit for Kohberger didn't reveal any new information about the killings or a possible motive.

Goncalves, Mogen, Kernodle, and Chapin were stabbed to death at an off-campus home sometime in the early morning hours of Nov. 13. The slayings initially mystified law enforcement, with investigators unable to name a suspect or locate a murder weapon for weeks.

But the case broke open after law enforcement asked the public for help finding a white sedan seen near the home around the time of the killings. The Moscow Police Department made the request on Dec. 7, and by the next day had to direct tips to a special FBI call center because so many were coming in.

Goncalves, 21, of Rathdrum, Idaho; Mogen, 21, of Coeur d’Alene, Idaho; Kernodle, 20, of Post Falls, Idaho; and Chapin, 20, of Mount Vernon, Washington, were members of the university's Greek system and close friends. Mogen, Goncalves and Kernodle lived in the three-story rental home with two other roommates. Kernodle and Chapin were dating, and he was visiting the house that night.

Autopsies showed all four were likely asleep when they were attacked. Some had defensive wounds and each was stabbed multiple times. There was no sign of sexual assault, police said.

A cleaning crew will soon be going through the Moscow, Idaho, home where four students were violently slain over six weeks ago, as investigators separately comb through over 19,600 tips related to the still unsolved murders. Moscow Police Chief James Fry said the department had enlisted a team of professionals to begin cleaning the home at 1122 King Road, where the four University of Idaho students were fatally stabbed on Nov. 13. They said the home will "remain an active crime scene under police control" for the time being. In a press release, police said a private company would be cleaning the residence, including by "removing potential biohazards and other harmful substances used to collect evidence."

The stabbing deaths shook the small town of Moscow, Idaho, a farming community of about 25,000 people — including roughly 11,000 students — tucked in the rolling hills of northern Idaho’s Palouse region.

The case also enticed online sleuths who speculated about potential suspects and motives. In the early days of the investigation, police released relatively few details publicly.

Fears of a repeat attack prompted nearly half of the University of Idaho students to switch to online classes for the remainder of the semester, abandoning dorms and apartments in the normally bucolic town for the perceived safety of their hometowns. Safety concerns also had the university hiring an additional security firm to escort students across campus and the Idaho State Police sending troopers to help patrol the city’s streets.

This story was reported from Cincinnati. The Associated Press and FOX News Digital contributed.