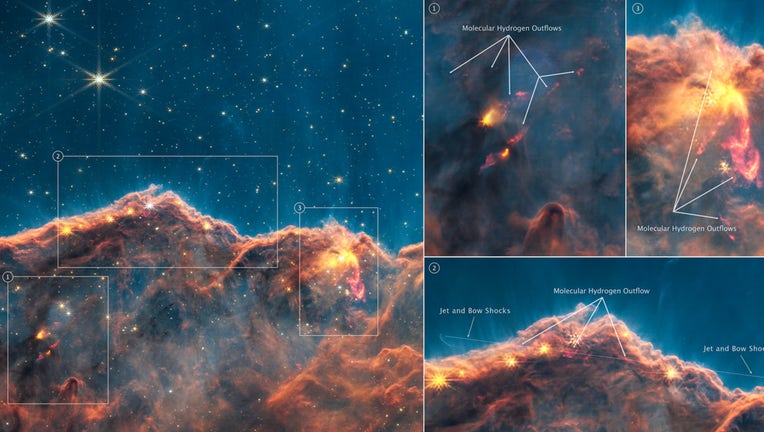 A star is born, and scientists watch for the first time thanks to the "unprecedented capabilities" of the James Webb Space Telescope, according to NASA scientists.

JWST technology ‘sees’ through the dust that hid jets and outflows of developing stars, shedding new light on the process and further evidence of a developing star that could eventually become another sun.

"It opens the door for what’s going to be possible in terms of looking at these populations of newborn stars in fairly typical environments of the universe that have been invisible up until the James Webb Space Telescope," astronomer Megan Reiter, who wrote the study describing these new finds said in a statement.

She continued, "Now we know where to look next to explore what variables are important for the formation of sun-like stars." 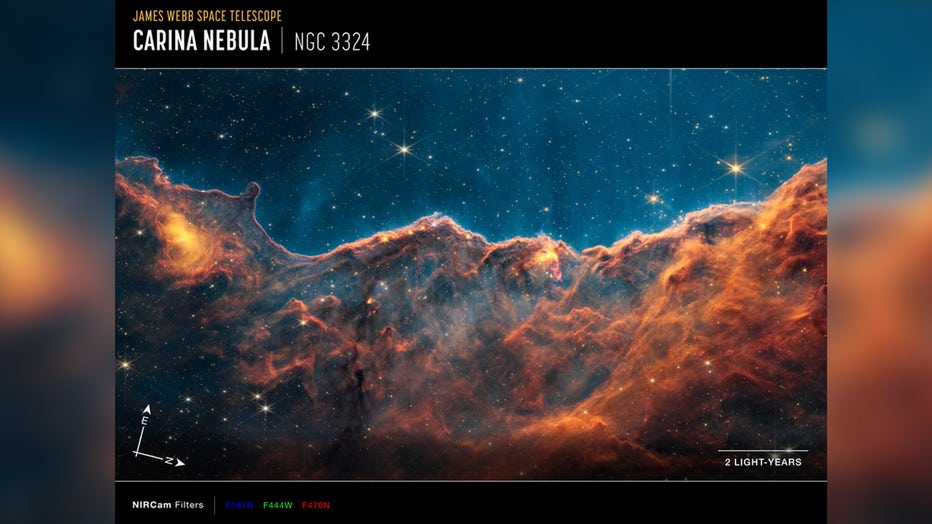 The scale bar is labeled in light-years, which is the distance that light travels in one Earth-year. It takes 2 years for light to travel a distance equal to the length of the bar. One light-year is equal to about 5.88 trillion miles. This image show

She and her colleagues discovered 24 new outflows and 15 potential protostars and were able to identify jets of developing stars. One of those jets spewed cosmic matter light years from the newborn. Jets are only active during a short time, a few thousand to 10,000 years in the multi-million years of a star’s formation, said the study.

The scale bar is labeled in light-years, which is the distance that light travels in one Earth-year. It takes 2 years for light to travel a distance equal to the length of the bar. One light-year is equal to about 5.88 trillion miles. This image shows invisible near-infrared wavelengths of light that have been translated into visible-light colors.

One of the researchers, John Morse from the California Institute of Technology, analyzed images through different filters afforded by JSWT, and said, "It’s like finding buried treasure."

"As young stars gather material from the gas and dust that surround them, most also eject a fraction of that material back out again from their polar regions in jets and outflows," stated NASA’s press release. "These jets then act like a snowplow, bulldozing into the surrounding environment."

The discovery gives new meaning to images taken by the Hubble Space Telegraph 16 years ago. Hubble images, taken in the visible spectrum, showed outflows, but they were largely hidden by dust.

NASA Hubble Space Telescope snapshots reveal a white bubble of activity within the core of the galaxy NGC 3079. The smaller photo at right is a close-up view of the bubble. Astronomers suspect that the bubble is being blown by "winds" (high-speed streams of particles) released during a burst of star formation.

The telescope’s Near-Infrared Camera (NIRCam) can see through dust in the atmosphere to reveal parts of the universe that telescopes, like the Hubble, couldn’t see in the visible spectrum.

1st April 1995: An image taken via Hubble telescope in 1995 of the Pillars of Creation, depicting gaseous pillars in M16, the Eagle Nebula. These columns of hydrogen and dust act as incubators for new stars.

Comparing the known outflow pictures to the new images with applied filters allows scientists to track the speed and direction of the cosmic spew. Scientists suggest that the information can help them uncover how our sun formed and how radiation from other stars impacted the development of planets like Earth.

The revelations came when scientists delved deeper into one of the first images from Webb, the Cosmic Cliffs. NASA shared the photos with the world in July of the star formation NGC 3324 in the Carina Nebula, which gives birth to stars.

The JWST launched a year ago on Christmas day.

Find the latest on this story at FOXWeather.com.