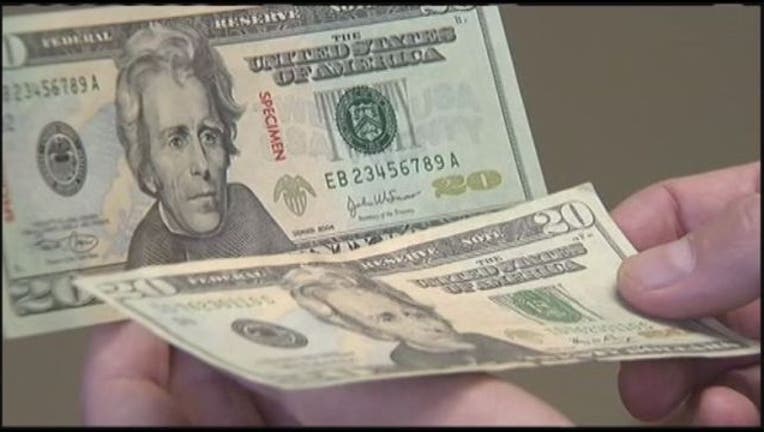 SAN FRANCISCO (KTVU) - Business is strong at San Francisco Deli and Wine, though its owner says his clerks struggle to weed out counterfeit cash from unscrupulous customers.

"Before, you used to be able to detect them with a pen. The pen became completely obsolete now because they can make the counterfeit money on cotton-based paper and the pen doesn't work anymore."

"Overwhelmingly, it's not a very big problem. One one-hundredth of one percent of the entirety of currency in circulation is actually counterfeit," said U.S. Secret Service Acting Special Agent Charles Marino.

Still, with several big counterfeit cash busts in Northern California last year, the Secret Service is closely monitoring trends in the Bay Area, working with digital companies on software upgrades to help prevent the scanning and copying of money.

Marino on Wednesday showed KTVU a fake $100 bill featuring Ben Franklin that actually has an Abraham Lincoln watermark. "They basically bleached off a five dollar bill and then digitally enhanced a $100 face plate on this," said Marino.

The Secret Service says about $156 million in counterfeit U.S. currency was seized globally in 2013.

Twenty-dollar bills are most commonly counterfeited domestically; the $100 bill is most popular overseas.

Nationally, the Secret Service said it made 2,438 counterfeit money-related arrests in 2013.

The agency has distributed illustrated guides to help businesses and the general public identify counterfeit cash. Marino said the agency relies on tips from the public and action from local law enforcement to help track counterfeiters.

"The notification to the Secret Service from these local authorities is seamless and that's very important, because when it's seamless, it means that we have a head start and a very short window to respond," said Marino. "We ask that the business owner remember who they got the money from, and give us as much information possible to help us thwart counterfeiting."

"It is very annoying for us as an owner because there is no insurance for it," said Montessier. "The bank just confiscates the money and we end up losing the goods [and] the change we gave to the people that brought the counterfeit money."

San Francisco's Gyro Express last month was paid with counterfeit cash that almost perfectly resembled the real thing. "It looked like a real hundred dollar bill but after I count the money, I was like, 'This is something weird, it doesn't feel the same,'" said Gyro Express owner Cem Bulutoglu. "Those [counterfeiters] know what they're doing- they don't come on slow times, they come when we're busy."

The Secret Service says when in doubt, business owners should take their time before handing over their goods.

"The most failsafe way to confirm that the money you're receiving is genuine is to compare it to a known, genuine bill," said Marino.