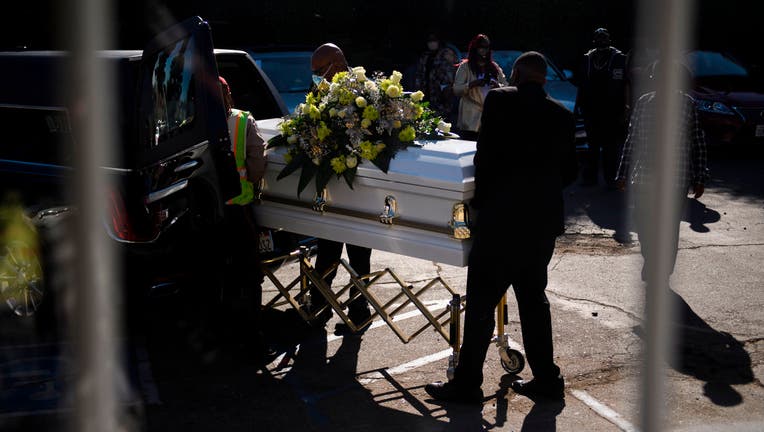 A casket is loaded into a hearse at the Boyd Funeral Home, as burials at cemeteries are delayed to the surge of Covid-19 deaths on January 14, 2021 in Los Angeles, California. - A corpse in the break room. Embalmed bodies in the garage. Boyd Funeral

LOS ANGELES - California's death toll during the coronavirus pandemic remains alarmingly high, topping 49,000 this weekend, even as the rates of new infections and hospitalizations continue to plummet across the state.

The number of patients in California hospitals with COVID-19 slipped below 7,000, a drop of more than a third over two weeks, the state Department of Public Health reported Sunday.

California reported another 408 deaths, bringing the total since the outbreak began to 49,105 — the highest in the nation.

Despite the grim death count, the positivity rate for people being tested has been falling for weeks, which means fewer people will end up in hospitals.

In Los Angeles County, the state’s most populous, the daily test positivity rate was 3.8% on Saturday, public health officials said.

Epidemiologist Dr. George Rutherford with the University of California, San Francisco said one of the reasons why cases are dropping so fast in California "is because of naturally acquired immunity," mostly in the southern part of the state. He estimated that 50% of Los Angeles County residents have been infected with the virus at some point.

"We’re really talking something starting to sound and look like herd immunity — although that true herd immunity is a ways off in the future," Rutherford told the Los Angeles Times.

Herd immunity is reached when so many people have immunity that a virus cannot find new hosts and stops spreading, resulting in community-wide protection. The effects may be greatest in places that endured the worst COVID-19 surges, including Los Angeles in the fall and early winter.

Residents were urged to continue to avoid close contact with anyone outside their household, while wearing masks and observing social distancing rules when outside.

"We must remain diligent with our safety measures even though we see overall decreases in cases, hospitalizations and deaths," Barbara Ferrer, LA County's public health director, said in a statement. "Let’s keep our guard up because we know letting our guard down will lead to more cases and, tragically, more deaths again."

California continues to struggle with vaccine shortages that are hindering efforts to inoculate substantial numbers in the state of nearly 40 million residents. About 7 million shots have been administered but county vaccination centers aren’t operating close to full capacity because there aren’t enough doses.

The state is shifting to a new vaccine distribution system run by insurer Blue Shield, which will take some decision-making power away from counties.