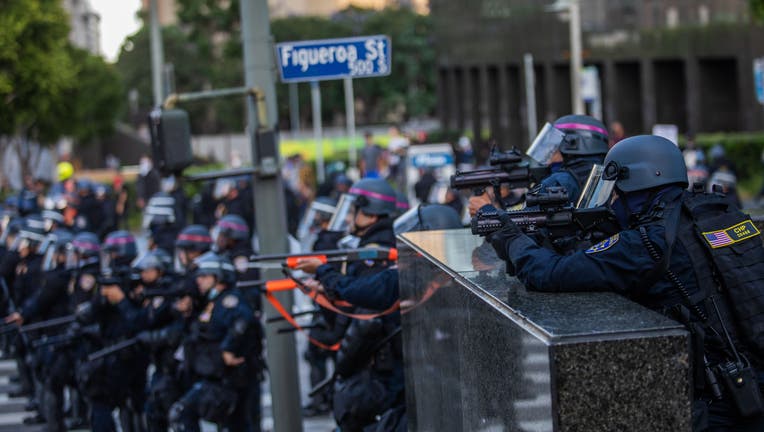 Police officers take position to shoot tear gas at the demonstrators after they throw stones in their direction in Downtown Los Angeles on May 30, 2020 in protest against the death of George Floyd, an unarmed black man who died while while being arre

SACRAMENTO, Calif. (AP) - A bill that would allow “bad officers” to be permanently stripped of their badges failed to pass the California Legislature on Monday as state lawmakers could not muster enough support to pass one of the year’s top policing reform bills.

The measure would have created a way to decertify officers found to have committed serious misconduct. The bill got a late boost from celebrity Kim Kardashian West, who tweeted that the measure is needed so officers are held accountable if they break the law.

But the bill could not overcome vehement objections from law enforcement organizations that the proposed system is biased and lacks basic due process protections. Five states currently have no way of decertifying poor police officers — California, Hawaii, New Jersey, Massachusetts and Rhode Island.

The bill failed despite the extraordinary momentum created by months of anger and nationwide protests following the death in May of George Floyd while he was being detained by Minneapolis police. Protests again have flared over the shooting of Jacob Blake in Kenosha, Wisconsin.

But other proposals did pass the Legislature on the final day of the 2020 session. Lawmakers approved a bill that would ban police officers from using choke holds and carotid holds. A choke hold applies pressure to a person’s windpipe while a carotid hold applies pressure to a person’s carotid artery, which slows the flow of blood to the brain. Gov. Gavin Newsom has pledged to sign that bill.

Lawmakers also approved a bill to require the state Attorney General to investigate every time police kill an unarmed civilian.

“We have too much distrust with the police policing themselves,” said Democratic Assemblyman Kevin McCarty, who authored the bill.

The Legislature separately sent another Bradford bill to Gov. Gavin Newsom that would require youths under 18 to consult with an attorney before they could waive their Miranda rights. Current law has that protection for youths through age 15.

Journalists would be cleared to go behind police lines during California protests and demonstrations under other legislation on its way to the governor. The legislation would also prohibit police officers from “intentionally assaulting, interfering with, or obstructing” or citing a member of the press.

Lawmakers also gave final approval to a bill that would make it clear that supervisors have the power to create oversight boards and inspectors general with subpoena powers over independently elected county sheriffs.

They sent Newsom a bill barring law enforcement officers in most cases from wearing camouflage uniforms or those similar to military uniforms. Democrat Sen. Bob Archuleta said civilians might confuse police with members of the National Guard during protests.

But lawmakers failed to pass a bill that would have made public disciplinary records against police officers accused of racist or discriminatory actions, or those who have a history of wrongful arrests or searches, among others. That bill passed the Assembly, but the state Senate did not vote on it before the deadline at midnight on Monday.

The Senate was delayed by more than an hour over a procedural spat between Democrats who control the chamber and Republicans, most of whom were forced to vote remotely after one tested positive for the coronavirus and possibly exposed his colleagues. Wary of running out of time, Democrats voted earlier in the night to limit debate on bills. Republicans were furious, invoking their own parliamentary maneuver to further delay consideration of non-controversial bills.

Lawmakers from both sides eventually resolved their dispute after a lengthy delay.

The decertification bill is SB731

The sheriff oversight bill is AB1185

The youths’ right to counsel bill is SB203

The journalism protection bill is SB629

The police uniforms bill is SB480

The choke holds bill is AB1196

The police records bill is SB776