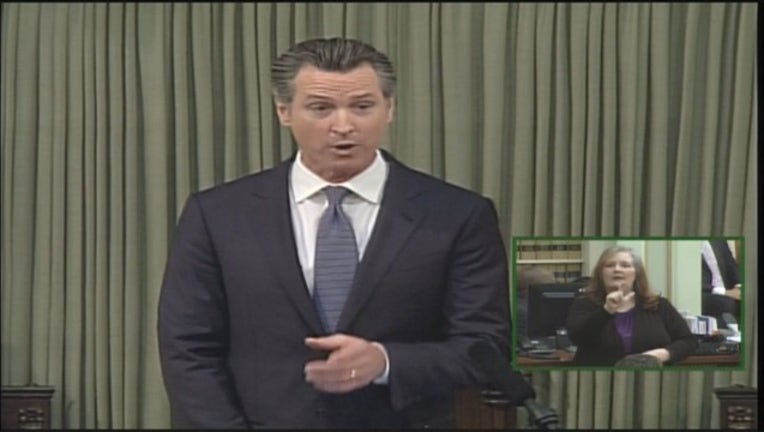 It's typical for new governors to shake up key posts even when the transfer of power remains within a party, and the appointments Newsom announced in his State of the State showed he's moving in his own direction in policy areas considered a priority by his predecessor, former Gov. Jerry Brown, a fellow Democrat.

"There's been too little oversight and not enough transparency," he said of the high-speed rail project. Later, he added, "we also need a fresh approach when it comes to meeting California's massive water challenges."

Constructing a high-speed train between Los Angeles and San Francisco and building two massive water tunnels to remake how the state's water is moved from north to south were among Brown's chief priorities. Newsom restated his call for a single water tunnel and said there "isn't a path" right now for to complete the high-speed rail line as planned, though his staff said he's still committed to seeing it through.

To chair the board of the High-Speed Rail Authority, he named Lenny Mendonca, his administration's economic development director. He'll replace Dan Richard, who had worked with Brown since the 1970s.

Newsom named Joaquin Esquivel to lead the State Water Resources Control Board, replacing Brown chair Felicia Marcus. He also appointed Sacramento Mayor Darrell Steinberg to a lead commission on homelessness and chose Linda Darling Hammond to lead the state Board of Education, saying it's time for an "honest conversation" about how California's schools are funded.

Newsom sounded themes of honesty, frankness and transparency repeatedly throughout the speech as he sought to craft himself as a leader bold enough to confront the uncomfortable challenges facing a state that ranks as the world's fifth largest economy but is also home to deep poverty.

Rather than focus on Trump, though, he spent the bulk of his speech on California policy.

"He set audacious goals, and he's assembling a formidable team to achieve them," said Senate President Pro Tem Toni Atkins, a Democrat. "We will need new ways of looking at old problems, and unprecedented collaboration to meet the challenges ahead."

His leadership change on the water board comes not only as the board debates the twin tunnels project but also as it oversees a controversial plan to increase flows in the Sacramento-San Joaquin River Delta.

On rail, Newsom said he'll shift the focus to completing just a 171-mile segment of the line already under construction in the state's Central Valley. He also called for greater transparency of the project that has been beset by cost overruns and delays.

Newsom said he'd continue doing environmental reviews for the LA-San Francisco line and seek private investment to connect the Central Valley to the state's major hubs, prompting confusion about whether he actually was changing the current policy.

Republican state Sen. Jim Nielsen of Fresno said Newsom's comments were an acknowledgement the full train would never be completed.

"It cannot be achieved, and the governor has essentially admitted it," he said. "This entire thing has now changed from whether or not there's going to be a high-speed rail to what's going to be left for central California."

On housing, Newsom said he has invited the leaders of 47 cities that haven't kept up with mandated affordable housing goals to meet next week for a "candid conversation."

"I don't intend to file suit against all 47, but I'm not going to preside over neglect and denial," he said. "These cities need to summon the political courage to build their fair share of housing."

Newsom also promised to have a plan within 60 days for dealing with the recent bankruptcy filing by Pacific Gas & Electric Corp. after years of devastating wildfires.

He said he has convened a team of the nation's best bankruptcy lawyers and financial experts from the energy sector to work with his administration to develop a strategy to protect the state's power grid, wildfire victims, company employees and ratepayers. He also promised to address the pressure that climate change is putting on utilities.