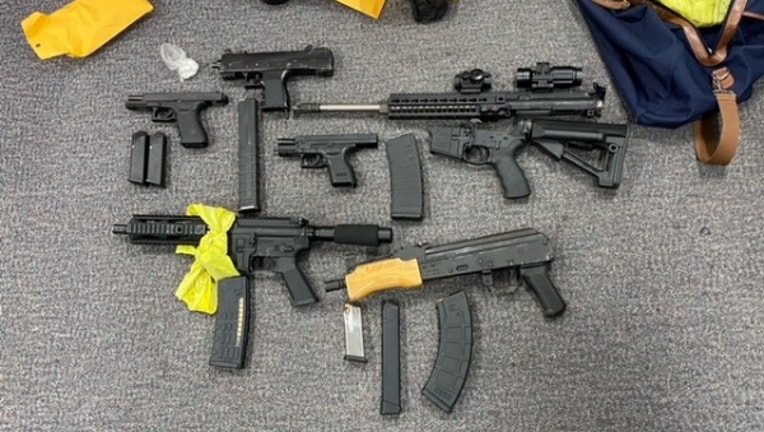 Gun bust in Sacramento earlier this year leads to charges of $600,000 in EDD fraud, prosecutors from Sacramento County announced on June 7, 2021.

Adrian Sykes, 24, was arrested Monday for the second time in the ongoing case, this time in Las Vegas.

Sykes was initially arrested back in February, when the Sacramento Police Department North Gang Enforcement Team pulled him over in traffic stop. That's when officers found him in possession of an illegal fully automatic handgun, prosecutors said.

They said a search of his home followed, resulting in the discovery of drugs, body armor and five guns including an assault rifle and two loaded unregistered guns, one a Mac-9 and the other an assault pistol.

He posted bail and was released, but investigators followed up on the debit cards. Prosecutors allege that Sykes and his girlfriend, Brittney Murchison, 26, filed 35 fraudulent unemployment claims and obtained more than $600,000 using personal identifying information from victims nationwide.

Murchison was arrested in late May on 16 charges of unemployment fraud and one of identity theft.

Sykes is awaiting extradition to California to face another 35 counts of unemployment fraud and one of identity theft.

Sacramento County prosecutors said they don’t know if either has an attorney who could comment on their behalf.

District Attorney Anne Marie Schubert, who is running for state attorney general, said, "Law enforcement across the state has witnessed staggering EDD fraud committed by criminals and their accomplices.  At the same time, we have witnessed an alarming increase of illegal firearms in our communities."

She called the rise in these criminal activities a "dangerous combination" that has "fueled a dramatic increase in violent crime throughout the state."