Their allegations come at a time when increased attention is being paid to the emotional abuse that athletes suffer at the hands of their coaches – and the more open-minded attitude that the public has about mental health awareness. Some studies say that as many as 50% of athletes have suffered anything from mild harassment to severe abuse. And these athletes are now demanding that the institutions where they gave their blood, sweat and tears do more to curb abusive coaching – including to pay for the much-needed therapy long after they've left the field.

SAN JOSE, Calif., - Kendal Ginda wrapped her arms around her teammates as they were jumping in sync and cheering.

She and her San Jose State University gymnastics teammates had just won a Mountain Pacific Sports Federation championship – a moment she had waited nearly 20 years for – or so she thought.

What was supposed to be one of the highest points of her life, was the lowest.

Now, almost a decade later, what she went through at the university still haunts her.

"I remember thinking maybe I can drive to the San Francisco bridge because I know people die there," Ginda said. "And that's the quickest way to die."

Ginda said her suicidal thoughts of plunging off the Golden Gate Bridge trace back to when she was mentally and verbally abused by her former head coach, Wayne Wright.

And now years later, she says because of that abuse she is suffering all over again, unable to get the mental health care she needs.

Ginda is not alone.

KTVU spoke with 13 former SJSU gymnasts who all echoed the same message – they were failed by the very system put in place to protect them.

One gymnast said Wright referred to girls on the team as "whore-ish" for wearing jeans with holes in them.

Another said Wright named a group "The Breakfast Club" that was reserved for women he did not think were in shape.

Their allegations come at a time when increased attention is being paid to the emotional abuse that athletes suffer at the hands of their coaches – and the more open-minded attitude that the public has about mental health awareness.

Some studies say that as many as 50% of athletes have suffered anything from mild harassment to severe abuse.

These athletes are now demanding that the institutions where they gave their blood, sweat and tears do more to curb abusive coaching – including to pay for the much-needed therapy long after they've left the field. 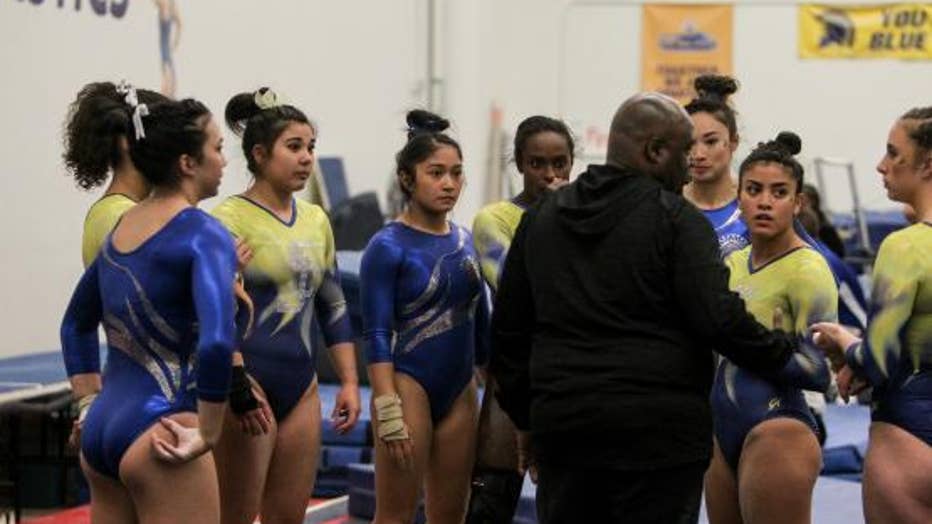 KTVU attempted to contact Wright multiple times. He did not return text messages or calls.

In 2018, the SJSU athletic department opened an investigation into Wright, interviewing nearly 30 former and current gymnasts and staff members.

That investigation, obtained by KTVU, was heavily redacted by the university.

But what wasn't completely blacked out painted a dark picture.

In the documents, investigators sided with the women, concluding that Wright was guilty of verbal abuse, body-shaming, manipulation, preventing athletes from receiving medical treatment and the list goes on.

In the end, the investigation found that Wright repeatedly called gymnasts dumb, stupid, trash, and special – as in someone who has a mental health condition. One gymnast told KTVU that Wright told her to stay away from the donuts, referring to her potential to increase her weight, after a family member died.

According to records, the university said their greatest concern was Wright's disregard for the health and safety of his team, the academic process, use of inappropriate terms to describe female athletes, his dishonesty during the investigation and his creation of an environment of fear, intimidation and lack of respect.

But Wright was not fired.

Instead, he was allowed to retire from the university on July 9, 2018.

Instead, the school sent a one-paragraph statement: "SJSU’s investigation of former gymnastics coach Wayne Wright involved 29 witnesses including 12 gymnasts that were on the team in 2018, 13 former gymnasts, and four staff members.  That investigation concluded on May 24, 2018.  Mr. Wright, who was employed pursuant to an employment contract, separated from the university effective July 9, 2018 with an agreement to not seek or accept employment and to not volunteer with the university in the future." 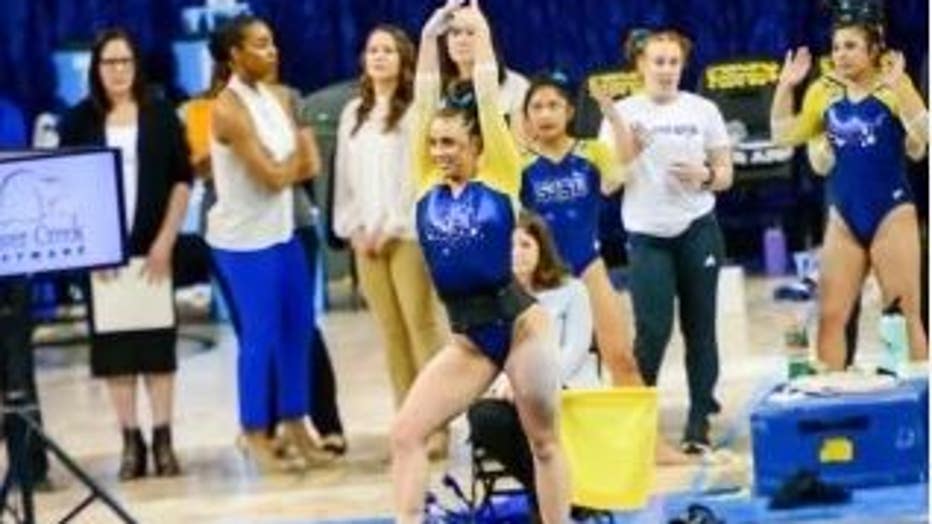 Kendal Ginda was a Spartan gymnast.

Many women interviewed for this story, including Amy LeClair, said bullying in college athletics is widespread.

She herself has suffered from depression and anxiety since leaving the program. She was a Spartan gymnast from 2012 to 2016.

"It's a systematic problem within the NCAA," LeClair said. "I think what we went through at SJSU, but I've heard similar stories of abuse within the NCAA."

All but one of the women KTVU spoke with say they have struggled with mental illness since leaving the program.

Ginda, who will give birth to her first child in a matter of days, says she was diagnosed with PTSD.

Another gymnast was diagnosed with obsessive compulsive disorder. Some of these gymnasts have since developed eating disorders.

"I was so horrifically abused," LeClair said.  "The mentality that I gained from that place is what put me into the hospital."

Pushing gymnasts past their limits

Ginda gave up her scholarship and left the gymnastics program a year early.

"I had severe depression and anxiety," Ginda said. "I had suicidal thoughts."

She said the dehumanizing treatment was not worth another year of free education.

While at the university, Ginda said she suffered from chronic back injuries, but Wright continued to push her past her physical limits.

She and other gymnasts said instead of seeing San Jose State medical staff, Wright repeatedly sent them to an off-campus doctor.

"I remember him putting me on meds and having the worst physical reactions," Ginda said. "He told me I had to take it."

She said her reactions got so bad she started blacking out at practice.

"I would say ‘Wayne, I feel like when I do a back flip I'm going to start twisting. I'm blacking out, I don't feel my fingers,’" Ginda said. "All the veins in my legs started turning black I was feeling extreme emotions. I told Wayne these are making me feel crazy, and he said ‘You just have to finish.’"

Alison Falat, another former gymnast, said she suffered a stress fracture in her foot while at the university. But every time she told Wright about the injury, he accused her of lying.

"I had to go see a doctor in private who told me my shin was going to split in half if I didn't stop training," she said. 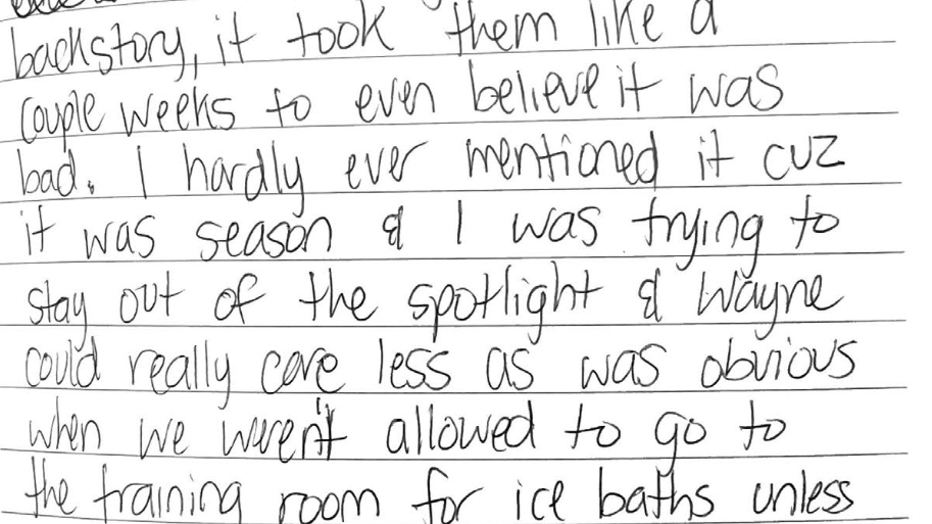 A journal entry former SJSU gymnast Allison Falat, wrote when she was attending the university.

She documented her struggles in her journal.

"Back story– it took them a couple of weeks to even believe it was bad," she wrote at the time. "I hardly ever mentioned it because it was season and I was trying to stay out of the spotlight and Wayne could really care less as was obvious when we weren’t allowed to go to the training room for ice baths unless we competed."

The other women KTVU spoke to made similar claims.

A number of the women said they tried to report the abuse to the SJSU athletic department – but said their emails and messages fell on deaf ears.

Ginda said it's because Wright was a star: He won three MPSF championships, made seven NCAA regional championship appearances and led his gymnasts to break every team and individual record since 2004.

"Why would you question a team that is winning?" Ginda asked rhetorically. "You wouldn’t."

The emotional abuse had financial repercussions as well.

They claim she was denied her coverage because she suffered postpartum depression and was hospitalized after giving birth.

But, LeClair believes her depression originally stemmed back to the bullying and verbal abuse she suffered while at San Jose State.

According to NCAA rules, Division I universities must provide medical care for athletes who suffer athletic-related injuries for two years after they leave or graduate.

However, also according to the same rule, each university gets to decide if an injury is athletic-related, if care is necessary and if so, how the care will be provided.

There are no rules for former athletes mental health protections.

The gymnasts say they know this all too well.

Too late for lawsuits

Trial Attorney Jemma Dunn says it's clear the NCAA and the universities athletic department let this case fall through the cracks.

None of the women interviewed for this story are able to take legal action.

"Generally speaking, the statute of limitations against Wayne Wright or against the school for what they did would likely be around two years," Dunn said. "There's not many statutes of limitations that exceed that."

Call for NCAA to change

What an athlete goes through in college can affect the rest of their life.

"I am still in therapy," Le Clair said. "I was hospitalized. I was in rehab. Financially, what we’re looking at is well into the six figures."

Experts say in today's climate, an athlete's mental health should be viewed with the same importance as their physical health.

Herndon believes it is time for the NCAA to change their rules.

"The NCAA has been on notice for years that college athletes are being mistreated; they need to change that," Herndon said.

The NCAA has made changes to better support athletes' mental health over the years.

But the disparities between supporting an athlete’s physical health and mental health once they’ve left campus are still glaring.

And no amount of financial support can wash away the memories.

Bailey O'Carroll is a reporter for KTVU. Email Bailey at bailey.ocarroll@fox.com. Or follow her on Twitter @baileyocarroll