According to AAA, California has the highest prices in the nation, with prices bumping up a few cents - just in the past week.

OAKLAND, Calif. - Another record has been set when it comes to gas prices in the Golden State.

According to AAA, California has the highest prices in the nation, with prices bumping up a few cents - just in the past week.

The most expensive gas prices in the Bay Area are in San Francisco at $5.97 a gallon.

Napa, Marin, Sonoma and San Mateo counties are all at the state average of $5.92.

Alameda, Contra Costa counties are in the upper $5.80 range.

Some of the least expensive gas in the state is in Solano County, with the average price at $5.79.

MORE: California gas rebate: Here's when you can expect to get it 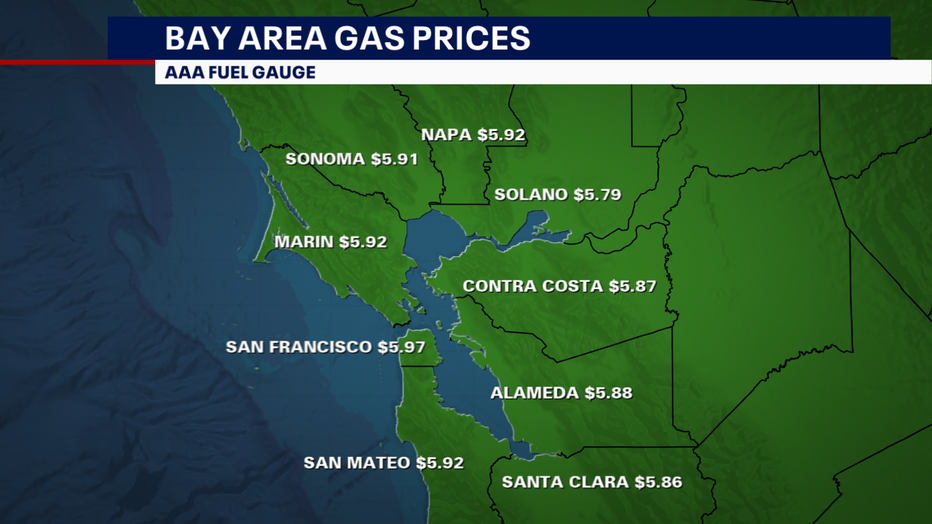 The average price of gas in California  – $5.92 a gallon – is six cents more than it was a week ago and $1 more than it cost a month ago.

In Los Angeles County,  the average price of a gallon of regular has already pushed past the $6 mark.

The steady spike in prices may be changing our commuting habits.

BART reports an increase in passengers. Daily ridership on BART is up about 30 percent this month with some of the biggest increases in passenger traffic, happening on weekends.