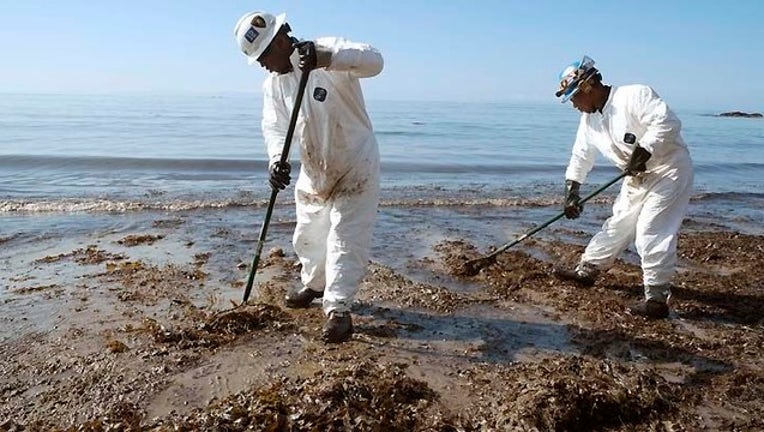 GOLETA, Calif. (AP) — More than 7,700 gallons of oil has been raked, skimmed and vacuumed from a spill that stretched across 9 miles of California coast, just a fraction of the sticky, stinking goo that escaped from a broken pipeline, officials said.

Up to 105,000 gallons may have leaked from the ruptured pipeline Tuesday, and up to 21,000 gallons reached the sea just north of Santa Barbara, according to estimates. The environmental impact still is being assessed, but so far there is no evidence of widespread harm to birds and sea life.

The spill occurred along a long, rustic coast that forms the northern boundary of the Santa Barbara Channel, home to a rich array of sea life. Whales, dolphins, sea lions, seals, sea otters and birds such as pelicans live along the channel between the mainland and the Channel Islands, five of which are a national park surrounded by waters declared a national marine sanctuary.

"When the water's choppy, the response gets complicated. But since the water's nice and flat, the oil sticks together and it's easier to spot and easier to pick up," he said.

Regulators and workers with Plains All American Pipeline LP, which runs the pipeline, aim to begin excavating the pipe Thursday to get their first look at the breach.

"We deeply, deeply regret that this incident has occurred at all," Chairman and CEO Greg L. Armstrong said at a news conference. "We apologize for the damage that it's done to the wildlife and to the environment."

Crude was flowing through the pipe at 54,600 gallons an hour during the leak, the company said. Company officials didn't say how long it leaked before it was discovered and shut down or discuss how fast the oil escaped.

Federal regulators from the Department of Transportation, which oversees oilpipeline safety, investigated the leak's cause, the pipe's condition and the potential violations.

The 24-inch pipe built in 1991 had no previous problems and was thoroughly inspected in 2012, according to the company. The pipe underwent similar tests about two weeks ago, though the results had not been analyzed yet.

The Los Angeles Times reported that the company accumulated 175 safety and maintenance infractions since 2006, according to federal records. The infractions involved pump failure, equipment malfunction, pipeline corrosion and operator error. The newspaper said a Plains Pipeline spokesman did not immediately respond to a request for comment about its regulatory record.

There was no estimate on the cost of the cleanup or how long it might take.

A combination of soiled beaches and the pungent stench of petroleum led officials to close popular campgrounds Refugio State Beach and El Capitan State Beach over the Memorial Day weekend.

Still, tourists pulled off the Pacific Coast Highway to eye the disaster from overlooking bluffs.

"It smells like what they use to pave the roads," said Fan Yang, of Indianapolis, who was hoping to find cleaner beaches in Santa Barbara, about 20 miles away. "I'm sad for the birds — if they lose their habitat."

The state Department of Fish and Wildlife closed fishing and shellfish harvesting for a mile east and west of Refugio beach and deployed booms to protect the nesting and foraging habitat of the snowy plover and the least tern, both endangered shore birds.

Gov. Jerry Brown on Wednesday night declared a state of emergency, a move that frees up additional state funding to help with the cleanup.

The coastline was the scene of a much larger spill in 1969 — the largest in U.S. waters at the time — that is credited with giving rise to the American environmental movement.

Environmental groups used the spill as a new opportunity to take a shot at fossil fuels and remind people of the area's notoriety with oil spills.

Large offshore rigs still dot the horizon off the coast, pumping crude to shore and small amounts of tar from natural seepage regularly show up on beaches.