Governor Gavin Newsom was in Huntington Beach to discuss the state's response to the massive oil sill.

HUNTINGTON BEACH, Calif. - California Governor Gavin Newsom on Monday declared a state of emergency in Orange County to support the emergency response to the oil spill off the coast of Huntington Beach that originated in federal waters.

"The state is moving to cut red tape and mobilize all available resources to protect public health and the environment," said Governor Newsom. "As California continues to lead the nation in phasing out fossil fuels and combating the climate crisis, this incident serves as a reminder of the enormous cost fossil fuels have on our communities and the environment."

Newsom directed state agencies "to undertake immediate and aggressive action to clean up and mitigate the effects" of the spill.

Efforts continue around Huntington Beach and beyond to clean up a massive oil spill from an offshore rig pipeline that threatened the lives of fish, birds and other ocean wildlife, while threatening to keep visitors from enjoying the area for weeks or months. 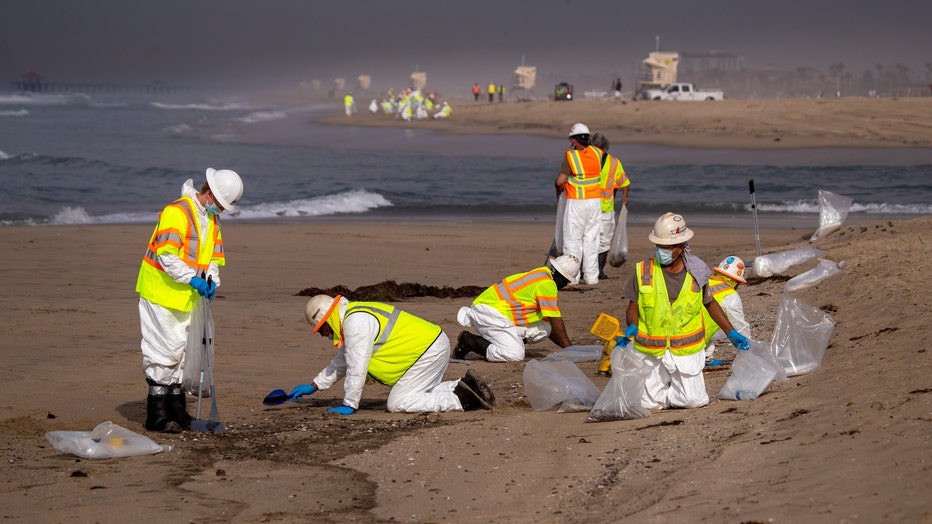 Cleanup crews spread out across the beach as they begin cleaning up oil in the sand from a major oil spill on Huntington State Beach in Huntington Beach Monday, Oct. 4, 2021. (Allen J. Schaben / Los Angeles Times via Getty Images)

Authorities believe the leak could have spilled as much as 144,000 gallons into the ocean.

"I would characterize it as isolated ribbons of oil, or patches of oil," Ore said. "It's constantly changing." 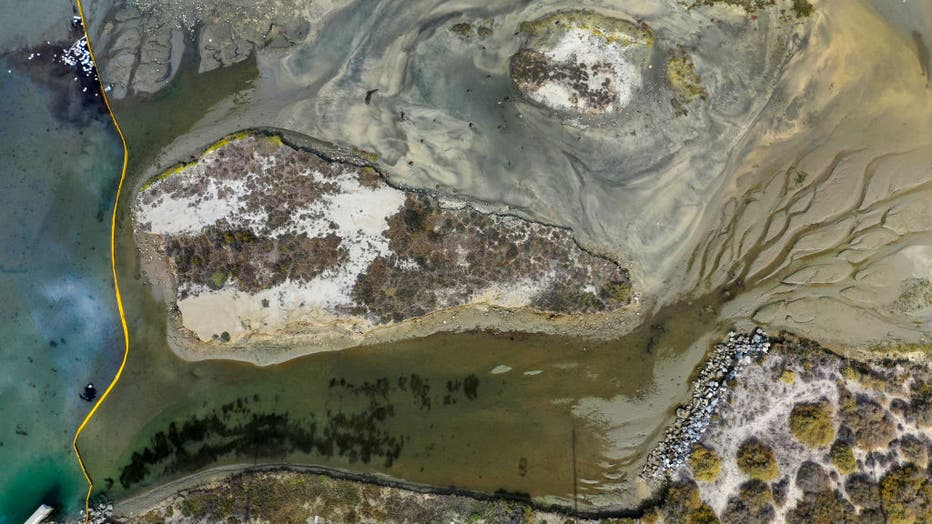 Oil has been detected from Huntington Beach south to Dana Point and will continue flowing south with the current as it stands, with some already being seen in Laguna Beach, Ore said.

"It's not one large slick of oil covering this large area of miles," she said.

Martyn Willsher, president and chief executive of Houston-based Amplify Energy, parent company of the oil rig Elly, said his company plans to send divers down to inspect a pipeline "to verify what we're seeing" from Remotely Operated Vehicles, or ROV, scans in hopes of confirming a cause of the leak.

"We're moving very closely to a source and cause of this incident," Willsher said. "I wanted the divers to go down there to the area before we commented further. They will be down there this (Monday) afternoon... Until we get down there with the divers I'm not going to speculate (on the cause)."

There has been some speculation a ship's anchor may have caused the leak.

Willsher said there are no active leaks across the 8,000 feet of pipeline checked.

The spill was likely caused by a pipeline leak from a facility operated by Beta Offshore about five miles off the coast, officials said. There has been speculation that a ship anchor may have struck the line, and Willsher said that is among the possibilities being examined, but he declined to comment until a closer inspection is done.

About 4,158 gallons of oil has been recovered from the water and 8,700 feet of boom has been deployed to control the spread of the oil.

Five shoreline cleanup and assessment teams have been dispatched to assess beaches from Laguna Beach to Dana Point Harbor.

Justice Department officials and federal investigators are "investigating to determine if any criminal liability exists as it relates to the oil spill," said Thom Mrozek, a spokesman for the U.S. Attorney's Office. 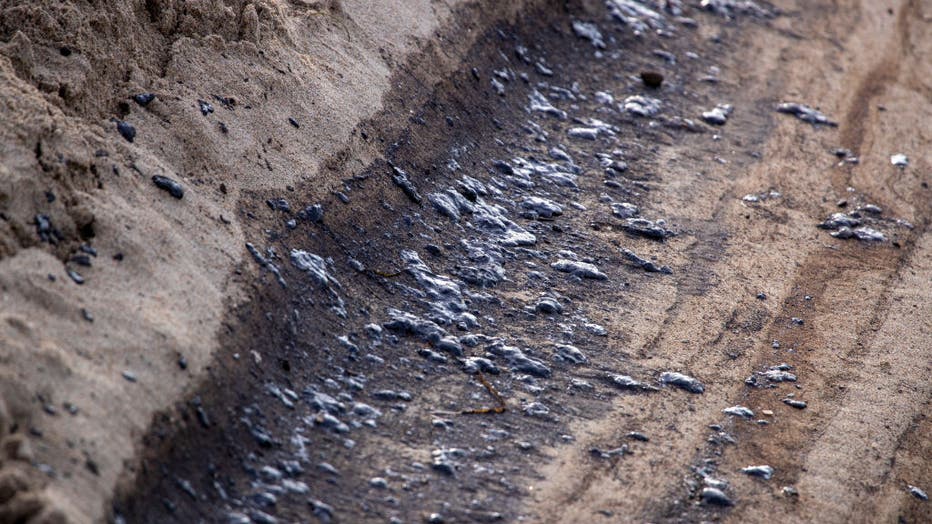 Oil lines a sand berm and water, forming globules, foam and sheen that flowed in from high tide and was held back by a sand berm and boom as a major oil spill washes ashore on the border of Huntington Beach and Newport Beach at the Santa Ana River Je

The spill was reported at about 9 a.m. Saturday, although some people reported smelling oil in the water late Friday. The Los Angeles Times reported that the state received a notification from an unknown source on Friday night about a sheen in the water. Amplify Energy did not report the leak to the state until about 9 a.m Saturday, saying it had occurred around 2:30 a.m.

Willsher and Ore said the first notification of something awry with the leak was made Saturday morning.

"This is absolutely unacceptable," Rep. Michelle Steel, R-Surfside, tweeted. "We need to know what actions were taken and why we weren't alerted sooner. We are facing a real crisis and I'll be requesting a full investigation."