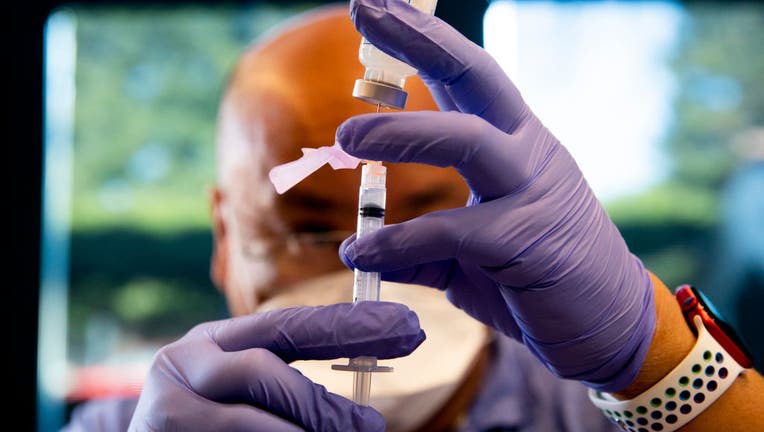 SAN FRANCISCO - California counties are opening mass vaccination centers they say can help curb the coronavirus surge that is killing more than 500 people a day in the state — but only if they can get the vaccine.

A center that can handle as many as 12,000 shots a day opened Friday at Dodger Stadium in Los Angeles but California Gov. Gavin Newsom and others said they had no idea when, if or how many doses will arrive from the federal government.

Newsom said that he and other governors were told earlier this week that a reserve supply of 50 million doses would be distributed. California has received more than 3.5 million doses of the vaccine and has administered over 1 million doses, while anticipating hundreds of thousands more.

Michael Pratt, a spokesman for the U.S. Department of Health and Human Services, said there has been no reduction in doses shipped to states.

But around the state, counties said they were struggling to make vaccination plans and said mass inoculations of people 65 and older, who represent most COVID-19 deaths, will have to wait, despite Newsom this week adding them to the eligibility list.

Instead, they are focusing on those at the head of the eligibility line: health care workers and the most vulnerable seniors in nursing homes. In addition, it takes two separate doses spaced weeks apart to ensure the most complete virus protection, health experts say.

The county— the nation's most populous with 10 million residents — is struggling to vaccinate its 800,000 health workers and doesn't anticipate being able to provide large-scale inoculations of its 1.3 million people 65 and older until February, Simon said.

"We don’t need the full supply to begin vaccinating," Simon said. "But there will be a heck of a lot of frustration if we open it up for that many people and there’s a very little supply of vaccine to serve them."

The city of San Francisco announced it's ready to handle 10,000 people a day at mass vaccination sites but can't put the plans in motion because it's unclear how many doses will be available.

"We have many city facilities, we have many empty parking lots, we have people reaching out to us, offering their locations for vaccine distributions," Mayor London Breed said Friday. "The locations are not the problem, it’s the supply."

Meanwhile, demand is soaring despite the confusion.

Kaiser Permanente said requests for vaccination appointments had overloaded its phone and online appointment systems. The health care giant said it received more than 90,000 calls to its vaccine hotline on Thursday.

"But the problem is we do not have enough vaccine supply on hand to meet even a fraction of this demand," it said.

The warning came as California saw another 637 deaths on Thursday and 42,655 newly reported COVID-19 cases. The state has been seeing those kinds of figures for the past two weeks, and many regions, especially in the south, have seen their hospitals and especially intensive care units overwhelmed.

California has the second-highest number of deaths in the country, although the state ranks 39th in the number of deaths per capita at 81.8. A state projection estimates another 10,000 people will die in the next three weeks.

Lawmakers and public health officials have said mass vaccinations are the key to flattening the surge, which could allow the easing of state orders that have closed many businesses to keep people from unsafely congregating.

Newsom has tried to shine a light on encouraging trends: Hospitalizations, ICU admissions and positivity rates — the percentage of people tested who have the virus — have all declined over the past seven days.

"We’re starting to see light at the end of the tunnel, not just the light that the vaccines provide," Newsom said.

This story has been updated to correct that the name of the Los Angeles County Department of Public Health's chief science officer is Paul Simon, not Paul Smith.