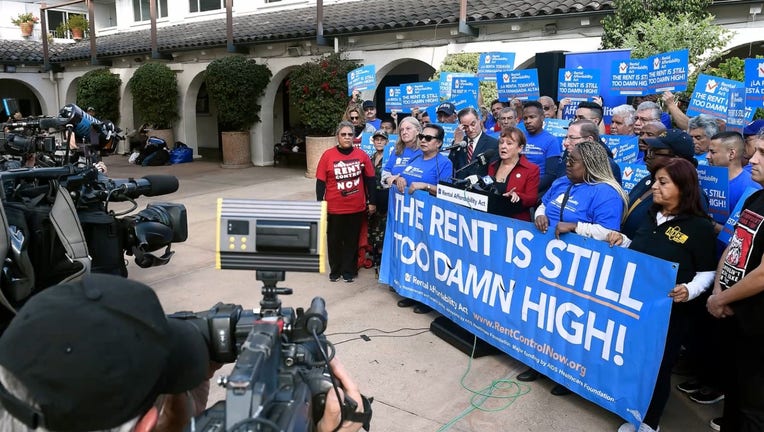 Housing advocates rally at a Los Angeles press conference at Placita Olivera to announce the submission of nearly one million voter signatures to qualify the Rental Affordability Act, a ballot initiative that would allow for the expansion of rent con

SACRAMENTO - The group behind a failed 2018 rent control measure is trying again for a ballot initiative next year, even after California lawmakers limited rent increases as one attempt to blunt the state’s housing affordability crisis.

The housing advocacy division of the AIDS Healthcare Foundation, called Housing Is A Human Right, said Thursday it submitted nearly 1 million signatures to put an initiative on the November 2020 ballot that would expand rent control statewide. The measure needs more than 600,000 valid signatures to qualify.

The problem has grown substantially worse in just the year since voters rejected the previous attempt, advocates said, in part because of soaring rents.

But opponents of more rent control said it would aggravate the problem by discouraging rental housing.

Organizers also said that a new exemption for single-family homes would rob opponents of an argument they used in 2018 to help defeat the measure.

“Now it’s very clear in the language, single family homes are not affected by this legislation,” Los Angeles City Councilman Paul Koretz said. “Without that scare tactic, this proposition is going to pass.”

At a rally in downtown Los Angeles, several dozen supporters waved placards with the slogan, “The rent is still too damn high,” and swayed to the lilt of a mariachi band.

Supporters also organized rallies in San Diego and San Francisco backing the measure, which would remove current restrictions in state law and allow cities and counties to implement and expand rent control policies that limit how much rents can increase each year.

The state's homelessness problem has drawn criticism from Trump and rare if grudging agreement from the state's Democratic leaders that the state must do more to address soaring rents and home prices.

California has 17 million renters, according to legislative analysts, more than half of whom spend at least 30% of their income on rent.

Gov. Gavin Newsom signed a law in October that will limit rent increases for some people over the next decade. The law restricts rent increases to 5% each year plus inflation until Jan. 1, 2030. It bans landlords from evicting people without cause so they can raise the rent for a new tenant.

California and Oregon have the only statewide rent increases, but California's new law includes exemptions that the law's author estimated will limit protections to about 8 million of the state's 17 million renters. The exemptions in the bill by Democratic Assemblyman David Chiu aim to encourage developers to build more rental properties and exclude the 2 million Californians who already have rent control.

Most of the state's largest cities, including Los Angeles, Oakland and San Francisco, have some form of rent control. But a state law passed in 1995 bans any new rent control on apartments built after that year and all single family homes.

The new initiative would amend the 1995 law without completely repealing it. It would exempt newly constructed buildings and single-family homeowners who own up to two homes in an attempt not to discourage new housing.

The AIDS Healthcare Foundation, a Los Angeles-based nonprofit known for backing controversial ballot measures, contributed $23 million of the $25 million in support. But opponents spent $75 million, arguing that it would discourage new affordable and middle-class housing.