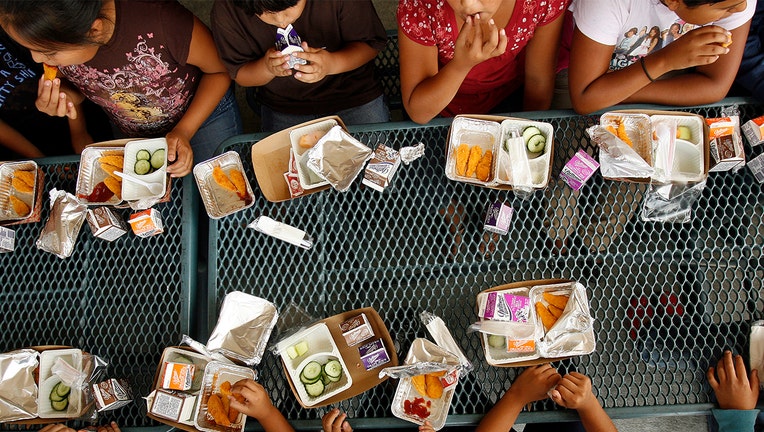 A California school district sent an email to parents telling them their children will be forced eat lunch outside in the rain due to coronavirus restrictions.

"Rain is forecasted this week which will present an added challenge to our lunch routines," Patwin Elementary School Principal Gay Bourguignon notified parents this week. "DJUSD [Davis Joint Unified School District] students are required to eat outside at this time due to COVID restrictions. I am asking you to send your children to school with rain gear and warm jackets."

The announcement resulted in an angry response from many parents who took to social media to express frustration with the statement from the principal.

"This exemplifies California’s response with kids during the pandemic," Reopen California Schools founder Jonathan Zachreson told Fox News. "The inhumane treatment of children continues from masking all day, even outdoors, to having to sit on hot cement and now eating lunch in the rain."

The announcement resulted in an angry response from many parents who took to social media to express frustration with the statement from the principal.

"During a heavy downpour, we will have a staggered lunch with one grade level at a time in our MPR for 15 minutes with all 10 doors open and 2 air purifiers running. After 15 minutes, students will be dismissed to their classrooms for inside recess. If you prefer that your child remains outside to eat please inform your teacher and we will make accommodations to support your request."

A parent of two children in the Davis Joint Unified School District who wished to remain anonymous told Fox News that the first email he received was "surprising but not shocking given the state of COVID fear in Davis itself."

The father of two added that his children are forced to wear masks outside during recess despite data showing outdoor transmission of the virus is less than 1% and the CDC’s own admission that schools are not a major coronavirus transmission source.

"The other parents I’ve spoken to thought it was ridiculous and overkill," the parent said about the announcement that students would be forced to eat lunch in the rain.

The Davis Joint Unified School District did not immediately respond to a request for comment from Fox News.

California has been at the center of the public debate on how to combat the spread of the coronavirus among children, which was highlighted by a student walkout this week organized by groups that oppose mandatory vaccines for young children.

"My kids stayed home yesterday for several reasons," California mother of three Lindsay Bingham told Fox News on Tuesday. "We definitely support the movement to send a statement to our government officials that they are overreaching and crushing our parental rights and encroaching on the rights of educators and staff with these mandates."