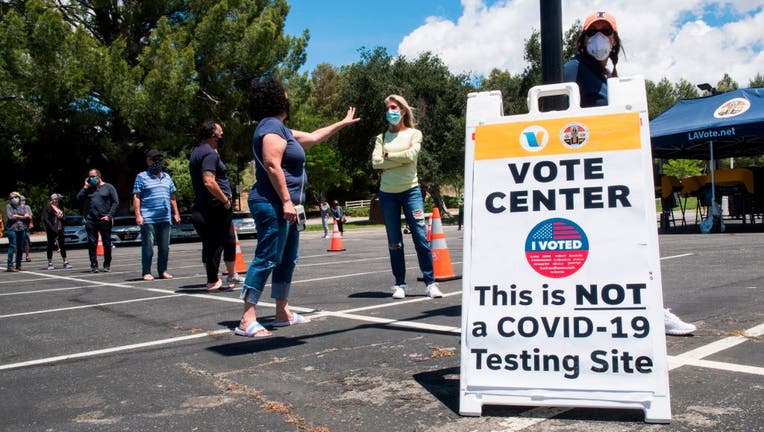 The change follows another law Newsom signed in June requiring counties to mail ballots to every active registered voter ahead of the Nov. 3 election. It’s part of the state’s strategy to keep people from gathering at polling places and risk further spread of the coronavirus that has killed nearly 9,900 Californians.

“This November will have the most unusual election, at least in my lifetime, but there will be an election,” said state Sen. Tom Umberg, a Democrat from Santa Ana and the author of the bill.

While every active registered voter in California will get a ballot in the mail, some people must vote in person for various reasons, including lost or damaged mailed ballots, the need for language assistance or help due to a disability, or because they want to register to vote on Election Day, which California law allows at polling places.

Traditional polling places — community centers, retirement homes and in some cases people’s garages — have been hard to come by because of the pandemic. Sacramento County had 84 vote centers for the March 3 primary election. But it has only been able to secure locations for 39 vote centers for November, according to county spokeswoman Janna Haynes.

Senate Bill 423, approved Thursday by the state Senate, gives counties a workaround. It lets them merge precincts, as long as they keep the ratio of one precinct per 10,000 registered voters instead of the typical 1,000 voters. These consolidated polling places must be open from Saturday, Oct. 31, through Monday, Nov. 2, for at least eight hours each day and from 7 a.m. to 8 p.m. on Election Day.

Counties will also be required to open one ballot drop-off location for every 15,000 registered voters for 28 days before the election.

As of Thursday, the nation’s most populous state had reported nearly 530,000 virus cases and nearly 9,900 deaths since the pandemic began, including 166 virus-related deaths reported Thursday.

But a technical problem with a database used to collect test information from labs means the state is missing data on virus infections throughout California. There was no update Thursday on the missing data, which state officials have acknowledged has caused them to undercount virus cases.

Newsom’s administration has not explained what caused the problem or said when it will be fixed.

Health and Human Services Secretary Mark Ghaly said late Thursday that the technology problem is his department’s “top priority and a team of dozens has been working around the clock to resolve these data problems.”

The issue has created challenges for county public health officials who are trying to track and trace virus cases to prevent the spread of the illness. The problem also led the state to stop removing or adding to a list of counties facing more restrictions on businesses and schools.

San Francisco officials were among those reporting problems because of the state computer system and said in a statement that the reporting delay “may give an impression that COVID-19 cases are slowing down, when this may not be the case.”

It’s not clear how many virus cases have gone uncounted because of the problem, which involves electronic reports sent from labs to the state. Ghaly acknowledged in a statement that contact tracing and hospital surge planning require accurate data.

“All Californians and local public health officials must have accurate data, and we pledge to share a full accounting of when these problems began and their magnitude as soon as we have a clear understanding – and the solutions to address them,” he said.

The virus has disrupted elections across the country, prompting long lines at polling places in states such as Wisconsin and Georgia.

The bill Newsom signed on Thursday would give counties the option of reducing the number of polling places. County officials can still conduct elections the same way they always have if they wish. But lawmakers expect many will use the new rules. Counties that can’t meet the requirements will be able to apply for a partial waiver.

Some Republicans opposed the bill, arguing it will create more confusion on Election Day when people show up at their usual polling places only to find them closed.

“We’re going to have a lot of voter confusion, and we could very well have problems in the November election,” Assemblyman James Gallagher, a Republican from Nicolaus, said during an Assembly debate.

Officials will also conduct voter education and outreach campaigns to make sure people know about the changes. The state budget includes more than $100 million for state and local costs to conduct the election during the pandemic.