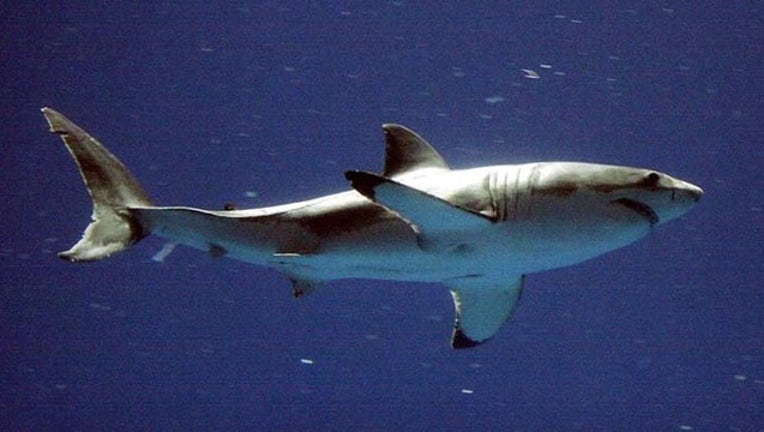 LOS ANGELES (AP) — Swimmers and surfers today are about 90 percent less likely to be attacked by sharks off California's coast than they were in the 1950s, even though there are hundreds of thousands more people in the water, according to a new study.

The findings mark a stark contrast to recent headlines out of North Carolina, where a record number of shark attacks have been reported this year. Eight people were bitten in the past three weeks alone.

What the study did show was that although the reported number of attacks along California has risen slightly over the past six decades, the risk of attack has plummeted, according to Ferretti and fellow Stanford researcher Fiorenza Micheli.

"Considering how many more people are out there in the ocean, we should expect many more attacks," Ferretti said Thursday.

Researchers said the decline likely was the result of sharks focusing their attention on their natural prey, such as sea lions and elephant seals — whose populations have surged in recent years thanks to conservation efforts.

There might also be fewer sharks in the water, they said. It's been tough historically to track shark populations.

On average in the 1950s, California saw less than one attack on humans per year, Micheli said. That number has gone up to about one or two attacks a year over the past decade.

The human population in coastal California tripled during the same period — from 7 million in the 1950s to 21 million in 2013, the study said. Meanwhile, the number of surfers, scuba divers and beachgoers has spiked.

In December, a juvenile great white pulled a man off his surfboard along the Central Coast. That was about 50 miles up the coast from the site of an attack on a surfer near Vandenberg Air Force Base in October. Both men survived.

In North Carolina, most of this year's attacks happened in shallow water. The eight reported in the past three weeks broke a record for the most shark bites off the state's coast in the 80 years in which records have been kept.

Ferretti said more research is needed to determine what's behind that spike. Some experts say it might be related to an unseasonably hot June that rapidly raised ocean temperatures off North Carolina and prompted fish to migrate north earlier than usual.

In California, researchers put the odds of a swimmer getting attacked by a great white at about one in every 738 million beach visits.

"You have a better chance of winning the lottery," Ferretti said. For surfers, the chances were one in 17 million.

Swimmers and surfers can further reduce their risk by taking to the water in the spring. Attack rates vary throughout the year, with the highest in October and November and the lowest between March and May. The pattern matches sharks' seasonal shifts in migration, Ferretti said.

Attacks are much less likely in San Diego, Orange, Los Angeles and Ventura counties. That's because sharks in Southern California tend to be juveniles, so they're smaller and less dangerous, researchers said.

As they grow, they migrate north to find prey, so they're more dangerous in Northern California.

The Stanford study will be published in this month's issue of the journal Frontiers in Ecology and the Environment.