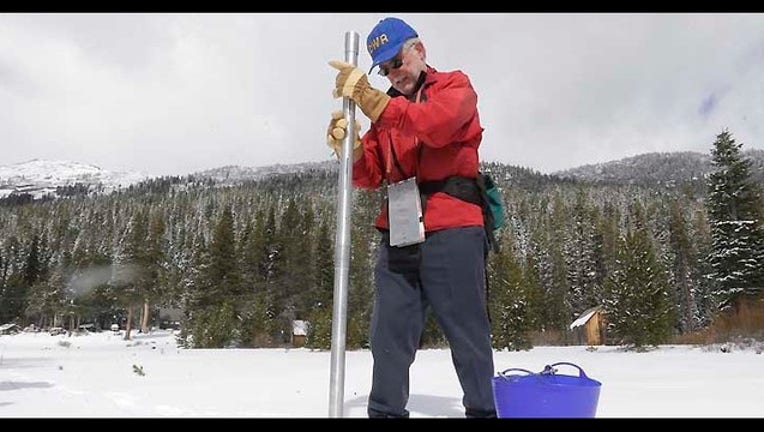 SACRAMENTO, Calif. (AP) — California's latest snow survey found on Tuesday that the Sierra Nevada snowpack is far below normal and could end up being the lowest on record in nearly 25 years.

Snow supplies about a third of the water needed by state residents, agriculture and industry, and a higher winter snowpack translates to more water for California reservoirs to meet demand in summer and fall. Last weekend's Sierra Nevada snowfall pleased skiers and snowboarders, but wasn't enough to offset previous weeks in which no snow fell.

The latest survey makes it likely that California's drought will run through a fourth consecutive year. Gov. Jerry Brown declared a drought emergency on Jan. 17, 2014, and his office continues to underline the need for sustained water conservation.

Frank Gehrke, chief of the California Cooperative Snow Surveys Program, said there were 6.7 inches of snow on the ground at the survey spot on Tuesday.

"It's very meager and it is clearly flirting with being the lowest on record," he said.

Unless March approximates the 1991 "Miracle March" with significantly more rain than normal, the traditional wet season will end on April 1 with an alarmingly low amount of water stored in the mountains as snow, officials said.

"There is no reason to think we will have such a good March again this year," Gehrke said.

Also on Tuesday, a new report shows state water conservation slipped during an unusually dry January just a month after residents met Brown's call to slash water use by 20 percent. Urban water use declined by only 9 percent in January compared to the same month in 2013, a survey by the State Water Resources Control Board found.

January was unseasonably dry and brought no measurable rainfall in downtown San Francisco for the first time in history.

The water board report showed conservation varied widely across the state, with communities in the South Coast area scaling back 9 percent and the San Francisco Bay Area 4 percent.

The data help monitor the effectiveness of the state's emergency conservation regulations, which include a ban on washing cars using hoses that do not have a shut-off valve and restrictions on watering lawns. The board will consider extending and expanding these regulations later this month.

Tuesday's snow survey found a snowpack water equivalent of just 0.9 inches in the snowpack near Echo Summit, about 90 miles east of Sacramento. That number shows a trend of declining water content in the snowpack.

During the last snow survey on Jan. 29, the measurement found a snowpack water equivalent of 2.3 inches in the same spot.