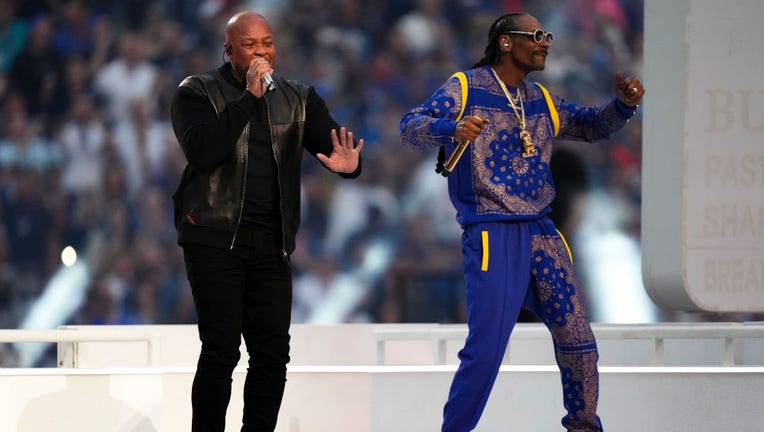 Dr. Dre performs in the Pepsi Halftime Show during the NFL Super Bowl LVI football game between the Cincinnati Bengals and the Los Angeles Rams at SoFi Stadium on Feb. 13, 2022 in Inglewood, California. (Photo by Cooper Neill/Getty Images)

SAN DIEGO, Calif. - A ballot measure backed by a celebrity lineup that includes Barbra Streisand and Los Angeles-born rappers will.i.am and Dr. Dre could pump as much as $1 billion a year from California’s general fund into arts education.

Voters on Tuesday will decide on the measure that has faced no organized opposition, a rarity. It would require the state to provide the equivalent of 1% of California’s state funding for public schools from pre-kindergarten through 12th grade for the arts.

Despite California’s vibrant arts and music scene that has given the world everything from Hollywood to surf rock, fewer than a quarter of its public schools have a full-time arts or music education teacher, and some schools offer no such classes at all.

The measure would send 30% of the earmarked money to low-income school districts, which have a large number of Black and Latino students.

Some critics have expressed concerns about earmarking more money from the state’s general fund when California faces many other challenges, from homelessness to wildfires.