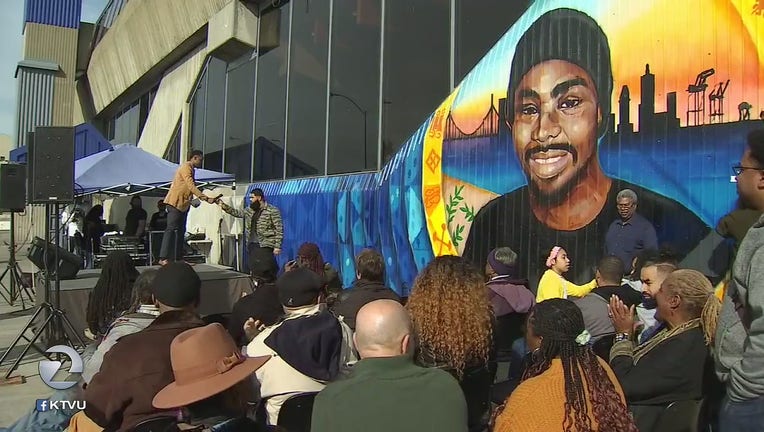 People came together at BART's Fruitvale Station for the 11th anniversary of the shooting death of Oscar Grant by BART police.

OAKLAND, Calif. - California's Attorney General Rob Bonta on Tuesday announced the state Department of Justice will conduct an independent review of a BART police officer's role in the shooting death of Oscar Grant.

The investigation will focus on any criminal liability for the former transit Officer Tony Pirone. Alameda County District Attorney Nancy O'Malley reviewed the case this year and declined to file charges.

"We condemn Pirone’s conduct, but we cannot charge him with murder, or any other crime," DA O’Malley stated at that time.

Following the Alameda D.A.'s decision, a request for review of the case was filed by Oscar Grant's mother, Wanda Johnson, the BART Board of Directors, the Justice 4 Oscar Grant Coalition and other local community leaders, the attorney general's office said.

"Transparency is critical to building and maintaining trust between law enforcement and the communities we serve," said Bonta. "The California Department of Justice is committed to conducting a thorough, fair, and independent review and will go where the facts lead."

Grant was shot and killed on New Year's Day 2009 on the Fruitvale BART station platform by BART police officer Johannes Mehserle, who said he mistook his gun for a Taser. Grant was unarmed at the time of the shooting. Mehserle was convicted of involuntary manslaughter and sentenced to two years in prison.

In a still picture taken from a cell-phone video of the incident, Pirone is the officer seen pinning down the 22-year-old Grant on the platform. His knee is on Grant's neck.

A 2009 report on the case by former Oakland City Attorney Jayne Williams and then-attorney Kimberly Colwell of the law firm Meyers Nave found that Pirone, "started a cascade of events that ultimately led to the shooting of Grant."

The report argued "(o)fficer Pirone's overly aggressive and unreasonable actions and conduct in violation of policy and acceptable standards contributed substantially to the escalation of the hostile and volatile atmosphere during the course of the incident."

Investigators also determined Pirone called Grant a racial slur multiple times while he was pinned to the ground at the Fruitvale BART station. Pirone has argued that he was repeating what Grant had said to him.

U.S. Health and Human Services Secretary Xavier Becerra, who served as California's attorney general until his confirmation to President Joe Biden's cabinet in March, declined to get involved in the case.

O'Malley's office issued a statement following the AG's announcement that said their office would cooperate with the new independent review.

"We join the Attorney General in our commitment to open, honest and legally supported decision making in reviewing cases presented. We stand strong in our commitment to the fair, equitable and ethical administration of justice, including in case review and/or prosecution," O'Malley said.