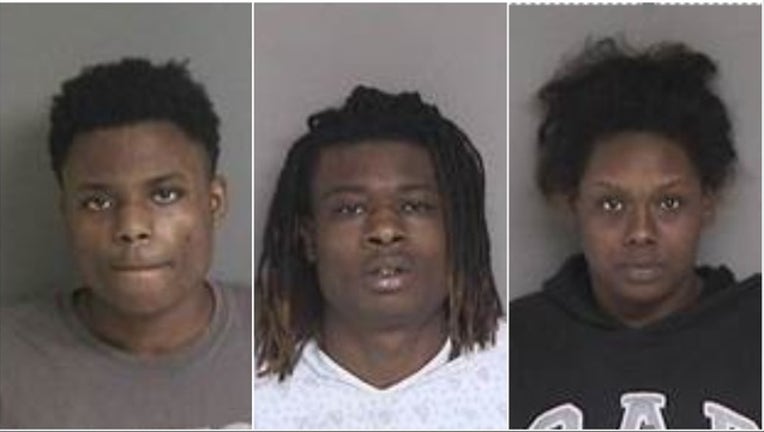 Charges have been filed against Maurice Turner (left), Donald Jeter (center) and Lolita Brinson in connection with the robbery of a TV news crew and the shooting of their security guard in Oakland on Sunday.

OAKLAND, Calif. (BCN) - Two men and a woman have been charged with multiple felonies in connection with the robbery of a television news crew and the shooting of their security guard in East Oakland on Sunday afternoon, Alameda County prosecutors said.

Suspects Maurice Turner and Donald Jeter, both 21-year-old men from Bay Point, and Lolita Brinson, 32, of Oakland, were charged and arraigned on Wednesday.

Jeter, who has a prior conviction for first-degree residential robbery in Contra Costa County in 2015, is charged with two counts each of second-degree robbery and assault with a semi-automatic firearm.

He's also charged with one count each of shooting at an occupied motor vehicle, evading an officer, possession of a firearm with a prior conviction, carrying a loaded firearm on his person and possession of ammunition by a prohibited person.

Brinson is charged with a felony count of possession of stolen property.

A three-person KPIX-TV crew consisting of reporter Joe Vasquez, photographer John Anglin and security guard Matthew Meredith was stationed outside the Oakland Public Library's 81st Avenue branch at 1021 81st Ave. shortly before 5 p.m. Sunday to report on activities related to the Oakland teacher strike when a vehicle pulled up to them, according to police.

At least two suspects approached the crew and demanded items such as cameras and equipment at gunpoint, and during the robbery Meredith was shot but he was able to return fire, police said.

The suspects fled the scene in the vehicle with stolen items, including the camera, according to police.

Officers who arrived at the scene outside the library branch found Meredith, who had been robbed and shot, Oakland police Officer Gedam Gebremichael wrote in a probable cause statement.

Meredith, who's licensed to carry a firearm, told officers he had been able to fire back, hitting a suspect and a vehicle, according to Gebremichael.

After the incident, Turner was dropped off at Highland Hospital in Oakland to be treated for gunshot wounds. Surveillance footage at the hospital showed him being dropped off from a vehicle that appeared similar to the suspects' vehicle, Gemremichael wrote.

A robbery victim was later able to identify Turner as a principal in the robbery, Gebremichael wrote.

Investigators learned that a camera taken during the robbery was at a home in the 5900 block of Tevis Street in East Oakland and police in marked units began following Jeter after seeing him leave the home in the suspects' vehicle, according to Gebremichael.

When police tried to stop Jeter, he sped away but crashed into several vehicles and was detained, Gebremichael wrote.

Officers learned later that Jeter had been involved in a near-collision at 79th Avenue and Rudsdale Street in East Oakland, near the library, shortly after the robbery and had gotten out of his vehicle and
fired shots at the other vehicle, Gemremichael wrote. Two of that vehicle's occupants were later able to identify Jeter in a lineup.

Brinson left the Tevis Street residence, where she lives, in another vehicle in an attempt to follow Jeter when he tried to flee, but police were able to detain her when that vehicle returned to the residence, according to Gebremichael.

That vehicle had multiple fresh bullet holes on one of its doors and fresh blood on its passenger seat, according to Gebremichael.