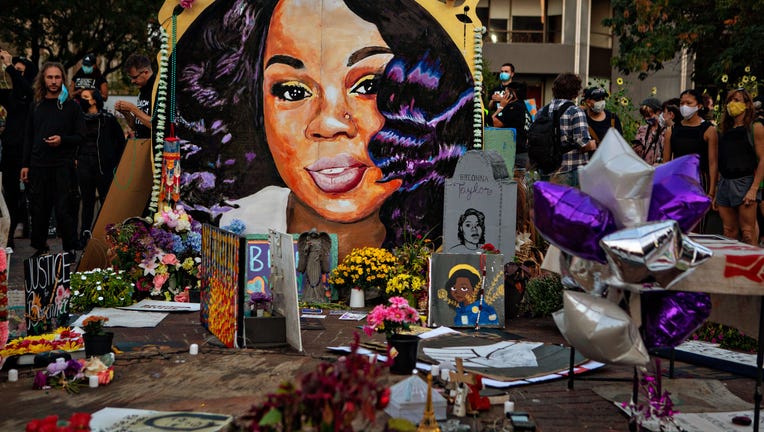 LOUISVILLE, KY - SEPTEMBER 26: People gather at Breonna Taylors make shift memorial in Injustice Square Park in downtown Louisville on Saturday, Sept. 26, 2020 in Louisville, KY. Hundreds of others protest a Kentucky grand jurys indictment of one of

LOUISVILLE, Ky. (AP) - A judge in Kentucky has signed an order permanently closing a criminal case against Breonna Taylor's boyfriend, who shot a police officer during the deadly raid that killed Taylor.

Prosecutors dismissed an attempted murder of a police officer charge against Kenneth L. Walker in May, about two months after Taylor's death. But prosecutors left open the opportunity to revisit the charge against Walker if new evidence surfaced.

Taylor was fatally shot by police who burst through her door with a narcotics warrant on March 13, 2020. She and Walker had settled in for the night when police arrived and knocked down the door. Walker said he thought an intruder was breaking in and he fired a single shot that struck an officer in the leg.

A motion from Walker's attorney asking for the permanent dismissal said Walker "acted in self-defense and that he did not know that police were on the other side of the door."

Jefferson Circuit Judge Olu Stevens' order on Monday dismissed the 2020 indictment against Walker with prejudice, meaning it can't be reconsidered.

The officer who was shot, Sgt. Jonathan Mattingly, recovered from the leg wound and remains on the Louisville police department. Two other officers who fired shots at Taylor's apartment have been dismissed from the department.