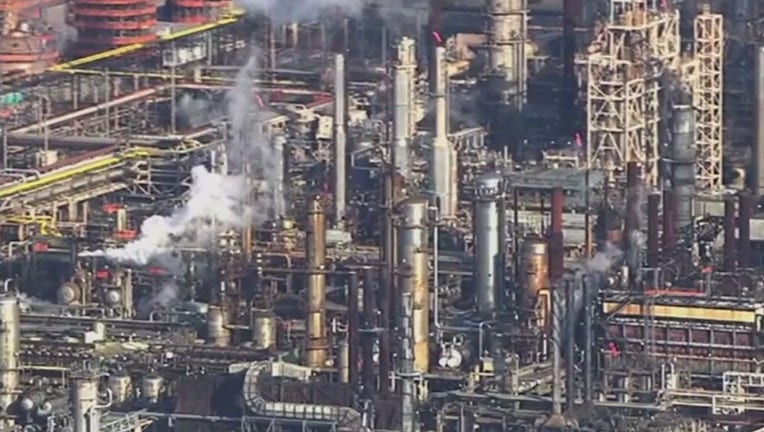 Workers at Chevron's refinery in Richmond will go on strike on March 21, 2022.

RICHMOND, Calif. - Workers at the Chevron oil refinery are going on strike in Richmond tomorrow.

The unionized workers have been negotiating a new contract with the oil company since the end of January, but those negotiations have broken down.

It’s a problem that has the potential to impact prices at the pump.

After that, the union says Chevron did not want to continue meeting, so workers decided to make plans to walk off the job.

Roughly 600 workers with UWS Local 5 will go on strike at the Richmond refinery Monday including machinists, pipefitters, plant process operators, and more.

Though safety improvements and medical insurance contributions are issues, the main sticking point is money.

Chevron has offered increases that run from 2.5% to 3.5% over four years.

"We countered with just a minimal bump and we were told by the corporation that there was no movement, no money," said BK White, a worker with USW Local 5 involved in negotiations.

Chevron says it’s offered essentially the same deal in what’s called a "National Pattern Agreement" to nine other unions and six have ratified the agreements.

"The union’s demands exceeded what the company believes to be reasonable and moved beyond what was agreed to as part of the national pattern bargaining agreement," Chevron said.

"We feel when a company can report 15 billion profit and the highest profit since 2014, they can give the people whose backs they’re making these earnings off of, give them a little boost to help them out," said White.

Chevron says it’s bringing in workers that have been training for a year to replace those on strike but won’t say how many, adding "We anticipate no issues in maintaining a reliable supply of products to the market."

But that’s not guaranteed and could impact California’s current average price of gas now at $5.85 a gallon, according to UC Berkeley professor Severin Borenstein.

"It would be coming at a very unfortunate time because we already have a shortage of refinery capacity in California right now, and so losing even one or two percent of the state's refinery capacity would probably result in a noticeable increase in gasoline prices," said Borenstein.

There are also safety concerns.

The Richmond Progressive Alliance which advocates for safety and a better environment, worries about replacements operating dangerous systems that are prone to problems even during normal times with experienced union workers.

"We’re really concerned about the well-being of Richmond residents as the plant is being run by nonunion workers who haven’t received the proper training or have the proper knowledge of the Chevron or Refinery," said Shiva Mishek, with Richmond Progressive Alliance.

Chevron says, for logistical reasons, it was unable to continue negotiations that failed this weekend but has plans to resume talks.

The union says, that’s news to them, and that they have yet to be contacted about a date and time to continue discussions.